Ohio New Hire Reporting
Ohio Revised Code section 3121.89 to 3121.8910 requires all Ohio employers, both public and private, to report all contractors
and newly hired employees to the state of Ohio within 20 days of the contract or hire date. Information about new hire reporting
and online reporting is available on our website: www.oh-newhire.com
To ensure the highest level of accuracy, please print neatly in
capital letters and avoid contact with the edges of the boxes.
The following will serve as an example:
A
B
Send completed forms to:
Ohio New Hire Reporting Center
PO Box 15309
Columbus, OH 43215-0309
Fax: (614) 221-7088 or toll-free fax (888) 872-1611
EMPLOYER INFORMATION
Employer Name:
Employer Address (Please indicate the address where the Income Withholding Orders should be sent).
Federal Employer ID Number (FEIN) (Please use the same FEIN as the listed employee’s quarterly wages will be reported under):
Employer City:
Employer State:
Zip Code (5 digit):
Employer Phone (optional):
Employer Fax (optional):
EMPLOYEE OR CONTRACTOR INFORMATION
Social Security Number (SSN) (Check here if using FEIN for the Contractor)
First Name:
Middle Initial:
Last Name:
Address:
City:
State:
Zip Code (5 digit):
REPORTS WILL NOT BE PROCESSED IF REQUIRED INFORMATION IS MISSING
Questions? Call us at (614) 221-5330 or toll-free (888) 872-1490
C
1
2
3
Extension:
State of Hire:
Date of Hire:
Date of Birth: Is this a Contractor?
Email:
JFS 07048 (Rev. 12/2013) Ohio Department of Job and Services
Yes
No
Date payments will begin for Contractor:
Length of time the Contractor will be performing services:
months
Reset Form 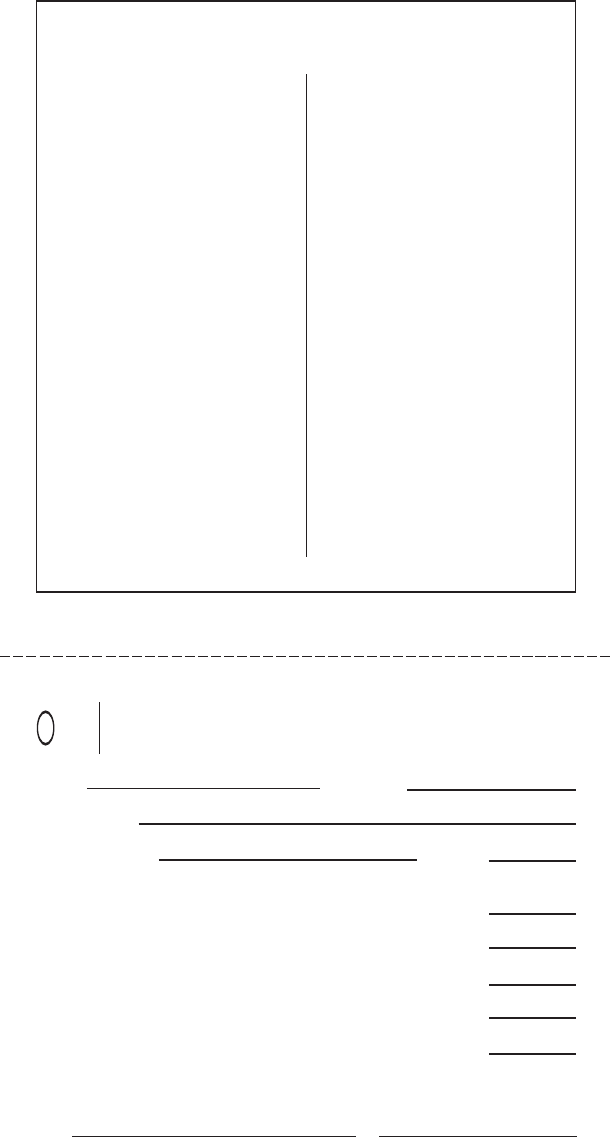 USCIS
Form I-9
OMB No. 1615-0047
Expires 08/31/2019
Employment Eligibility Verification
Department of Homeland Security
U.S. Citizenship and Immigration Services
Form I-9 07/17/17 N
Page 1 of 3
►START HERE: Read instructions carefully before completing this form. The instructions must be available, either in paper or electronically,
during completion of this form.
Employers are liable for errors in the completion of this form.
ANTI-DISCRIMINATION NOTICE: It is illegal to discriminate against work-authorized individuals. Employers CANNOT specify which
document(s) an employee may present to establish employment authorization and identity. The refusal to hire or continue to employ
an individual because the documentation presented has a future expiration date may also constitute illegal discrimination.
Section 1. Employee Information and Attestation (Employees must complete and sign Section 1 of Form I-9 no later
than the first day of employment, but not before accepting a job offer.)
Last Name (Family Name) First Name (Given Name)
Middle Initial
Other Last Names Used (if any)
Address (Street Number and Name)
Apt. Number City or Town
State
ZIP Code
Date of Birth (mm/dd/yyyy)
U.S. Social Security Number
-
-
Employee's E-mail Address
Employee's Telephone Number
I am aware that federal law provides for imprisonment and/or fines for false statements or use of false documents in
connection with the completion of this form.
I attest, under penalty of perjury, that I am (check one of the following boxes):
1. A citizen of the United States
2. A noncitizen national of the United States (See instructions)
3. A lawful permanent resident
4. An alien authorized to work until
(See instructions)
(expiration date, if applicable, mm/dd/yyyy):
(Alien Registration Number/USCIS Number):
Some aliens may write "N/A" in the expiration date field.
Aliens authorized to work must provide only one of the following document numbers to complete Form I-9:
An Alien Registration Number/USCIS Number OR Form I-94 Admission Number OR Foreign Passport Number.
1. Alien Registration Number/USCIS Number:
2. Form I-94 Admission Number:
3. Foreign Passport Number:
Country of Issuance:
OR
OR
QR Code - Section 1
Do Not Write In This Space
Signature of Employee
Today's Date (mm/dd/yyyy)
Preparer and/or Translator Certification (check one):
I did not use a preparer or translator. A preparer(s) and/or translator(s) assisted the employee in completing Section 1.
(Fields below must be completed and signed when preparers and/or translators assist an employee in completing Section 1.)
I attest, under penalty of perjury, that I have assisted in the completion of Section 1 of this form and that to the best of my
knowledge the information is true and correct.
Signature of Preparer or Translator
Today's Date (mm/dd/yyyy)
Last Name (Family Name) First Name (Given Name)
Address (Street Number and Name)
City or Town
State
ZIP Code
Employer Completes Next Page

LISTS OF ACCEPTABLE DOCUMENTS
All documents must be UNEXPIRED
Employees may present one selection from List A
or a combination of one selection from List B and one selection from List C.
LIST A
2. Permanent Resident Card or Alien
Registration Receipt Card (Form I-551)
1. U.S. Passport or U.S. Passport Card
3. Foreign passport that contains a
temporary I-551 stamp or temporary
I-551 printed notation on a machine-
readable immigrant visa
4. Employment Authorization Document
that contains a photograph (Form
I-766)
5. For a nonimmigrant alien authorized
to work for a specific employer
because of his or her status:
Documents that Establish
Both Identity and
Employment Authorization
6. Passport from the Federated States of
Micronesia (FSM) or the Republic of
the Marshall Islands (RMI) with Form
I-94 or Form I-94A indicating
nonimmigrant admission under the
Compact of Free Association Between
the United States and the FSM or RMI
b. Form I-94 or Form I-94A that has
the following:
(1) The same name as the passport;
and
(2) An endorsement of the alien's
nonimmigrant status as long as
that period of endorsement has
not yet expired and the
proposed employment is not in
conflict with any restrictions or
limitations identified on the form.
a. Foreign passport; and
For persons under age 18 who are
unable to present a document
listed above:
1. Driver's license or ID card issued by a
State or outlying possession of the
United States provided it contains a
photograph or information such as
name, date of birth, gender, height, eye
color, and address
9. Driver's license issued by a Canadian
government authority
3. School ID card with a photograph
6. Military dependent's ID card
7. U.S. Coast Guard Merchant Mariner
Card
8. Native American tribal document
10. School record or report card
11. Clinic, doctor, or hospital record
12. Day-care or nursery school record
2. ID card issued by federal, state or local
government agencies or entities,
provided it contains a photograph or
information such as name, date of birth,
gender, height, eye color, and address
4. Voter's registration card
5. U.S. Military card or draft record
Documents that Establish
Identity
LIST B
OR AND
LIST C
7. Employment authorization
document issued by the
Department of Homeland Security
1. A Social Security Account Number
card, unless the card
includes one of
the following restrictions:
2. Certification of report of birth issued
by the Department of State (Forms
DS-1350, FS-545, FS-240)
3. Original or certified copy of birth
certificate issued by a State,
county, municipal authority, or
territory of the United States
bearing an official seal
4. Native American tribal document
6. Identification Card for Use of
Resident Citizen in the United
States (Form I-179)
Documents that Establish
Employment Authorization
5. U.S. Citizen ID Card (Form I-197)
(2) VALID FOR WORK ONLY WITH
INS AUTHORIZATION
(3) VALID FOR WORK ONLY WITH
DHS AUTHORIZATION
(1) NOT VALID FOR EMPLOYMENT
Page 3 of 3
Form I-9 07/17/17 N
Examples of many of these documents appear in Part 13 of the Handbook for Employers (M-274).
Refer to the instructions for more information about acceptable receipts.