Use Fill to complete blank online AUSTRALIAN NATIONAL UNIVERSITY pdf forms for free. Once completed you can sign your fillable form or send for signing. All forms are printable and downloadable.

On average this form takes 54 minutes to complete 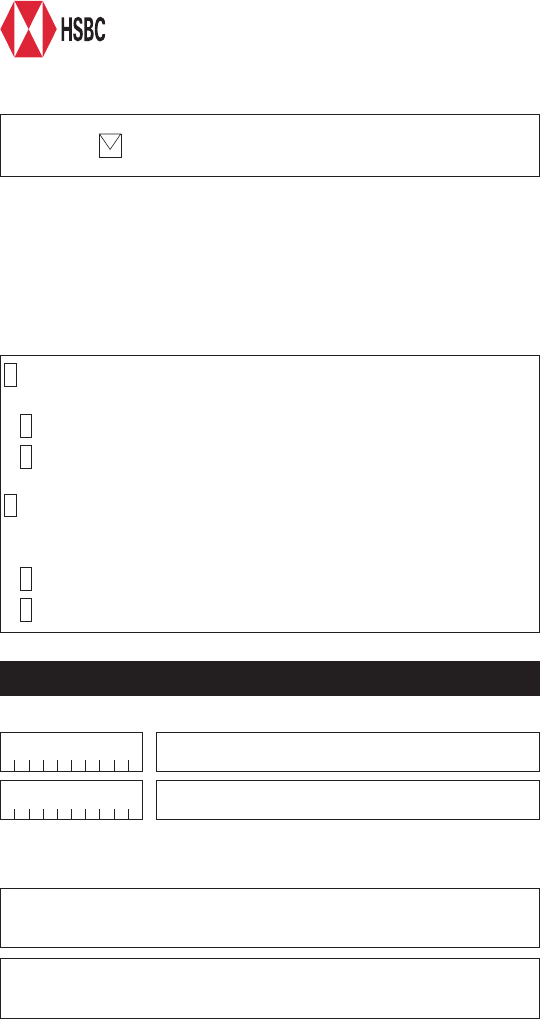 Issued by HSBC Bank Australia Limited ABN 48 006 434 162 AFSL 232595
HBAA123CUA 06/20 Page 1 of 5
1. ACCOUNT HOLDER INFORMATION
Personal Transactional and Savings Account(s) Only
Authority to Operate Amendment Form
Use this form to add or remove an Authority to Operate arrangement on your personal transactional and savings
account(s).
HSBC will collect, use, store and disclose personal information about you and any third party connected to your
account in accordance with our Privacy Policy
, available at www.hsbc.com.au and the terms and conditions of your
account(s).
Mail the completed form and other required documents to:
HSBC SD Banking Operations, GPO Box 5302, SYDNEY NSW 2001
Which type of arrangement you would like to add or remove?
Power of Attorney
A legal arrangement in which another person(s) is granted control of the account holder's account(s) under
the power of attorney
Authorised Signatory
An instruction given by the account holder(s) to allow other individual(s) to operate their account(s)
Add an Authorised Signatory – Complete Sections 1, 2, 3 and 7
Remove an Authorised Signatory – Complete Sections 5 and 7
Add a Power of Attorney – Complete Sections 2, 3 and 4
Remove a Power of Attorney – Complete Section 6 and 7
Customer number Account Holder full name
I authorise each person contained in section 2 “Authority to Operate” to jointly and severally operate all of my
transactional and savings accounts.
I understand that in making this authorisation, the person I’ve authorised can do anything I can do under the
agreement between me and HSBC for all of my transaction/savings account(s), which may include the following:
• entering into any agreements with HSBC or another person in relation to my accounts;
• make withdrawals and other payments out of the account, including direct debits and other regular payment
arrangements;
• giving HSBC receipts and acknowledgements for withdrawals;
• negotiating personal cheques and other negotiable instruments;
• receiving account statements;
• making payments out of the account, and stopping any payments made out of the account;
• making deposits into the account;
• setting up and removing any online banking capability for me;
• setting up online banking capability for themselves over my account(s);
• requesting and cancelling debit cards for me;
• opening accounts on my behalf;
• closing accounts on my behalf; and
• anything else an account holder can do under the agreement between HSBC and me.
By authorising each person, I understand all of the following:
• I’m liable for what the person I’ve authorised does on the account;
• I won’t hold HSBC liable for what the person I’ve authorised does, except where HSBC has been negligent or
committed fraud;
• HSBC isn’t required to enquire into the circumstances of any instructions given by the person I’ve authorised;
and
• this authority will remain in place until I revoke it in writing (together with any other account holder) and give
this to HSBC, or until HSBC sends me written notice that it has decided to cancel this authorisation.
Jointly and Severally – When we say “jointly and severally” this means that if you have more than one authorised
signatory they can do something on their own or together.
Transactional and Savings Accounts – When we say “transactional and savings accounts” this means all of your
accounts which are not credit accounts (i.e. where we have not lent you money).
Instructions
Print
Clear

Page 5 of 5
PRIMARY IDENTIFICATION DOCUMENTS
You MUST use one of the following to verify your identity:
• Photocard Australian drivers licence issued by an Australian
State or Territory #
• Passport – signature and photo page(s)
• Government issued Proof of Age card
• Foreign National Identity card †
• Foreign drivers licence *
• Birth Certificate ¥
EQUIVALENT JURISDICTIONS
Australia, Austria, Belgium, Canada, China, Denmark, Finland,
France, Germany, Greece, Guernsey, Hong Kong, Iceland,
Ireland, Isle of Man, Italy, Japan, Jersey,Korea (South),
Luxembourg, Mauritius, Netherlands, New Zealand, Norway,
Portugal, Singapore, Spain, Sweden, Switzerland, Dubai
International Financial Centre, United Kingdom, United States
of America.
# Includes renewed, interim, learners, provisional, bus, motor
cycle or truck licence. This does not include a driving licence
issued on paper or a boat licence.
† Must be issued by a foreign government, the United Nations
or a United Nations agency.
* Issued under a law of a foreign country for the purposes of
driving a vehicle (as detailed in the Australian driving licence
above). This does not include a driving licence issued on
paper.
¥ For primary or secondary school students aged under 18
only
.
^ Must record the individual’s lease of a residential property;
be current; and be issued by a real estate agent or serviced
apartment.
~ Where the minimum contract length of 12 months for the
provided service is confirmed and is dated within the last
3 months.
SECONDARY IDENTIFICATION DOCUMENTS
You MUST use one of the following to verify your address
(except if using an Australian drivers licence as outlined overleaf):
• Local Authority or Government Department letter, or
statement dated within the last 12 months, e.g. Australian
Taxation Office (ATO) notice letter
• Bank statements, Australian council rates notice or utility
bills (including e-statements) dated within the last three
months (internet screenshots are not accepted) – must
contain full first and last names
• Residential property lease agreement / Residential Serviced
Apartment lease agreement ^
• Mobile phone bill, home internet bill, pay TV bill or utility
welcome letter ~
•
A letter issued by an Australian school ¥. The letter must
record the period of time the individual attended the school
and be issued with the preceding 3 months, printed on the
school’s letterhead and be signed by the school principal.
IDENTIFICATION DOCUMENTS
Important notes:
• Expired documents will not be accepted
• Any document not written in English must be accompanied
by an accredited translation or translation from an HSBC
staff member. An accredited translator means a person
currently accredited by the National Accreditation Authority
for Translators and Interpreters Ltd. (NAATI) at the level
of Professional Translator, or above, to translate from a
language other than English into English –
see www.naati.com.au
• Copies of identity documents must be of both sides
(where double-sided) and clear
AUTHORISED REFEREES
Authorised Referees must satisfy one of the occupations below
and cannot be an immediate family member.
a) Legal professional who is currently licensed or registered
to practise under a law in force in a State or T
erritory
b) Accountant who is a member of:
1. a fellow of the National Tax Accountants’ Association;
or
2. a member of any of the following:
– Chartered Accountants Australia and New Zealand;
– the Association of Taxation and Management
Accountants;
– CPA Australia;
– the Institute of Public Accountants
c) A current member of The Governance Institute of Australia
d) An officer with, or authorised representative of, a holder
of an Australian financial services licence, having 2 or
more years of continuous service with one or more
licensees
e) An officer with, or a credit representative of, a holder of
an Australian credit licence, having 2 or more years of
continuous service with one or more licensees
f) Bank officer with 2 or more continuous years of service
g) Australian Consular Officer or Australian Diplomatic Officer
who is appointed by the Commonwealth to hold or act
the role in a country or place outside Australia
h) Justice of the peace
i) An agent of the Australian Postal Corporation who is in
charge of an office supplying postal services to the public
j) Police Officer
k) Commissioner of Oaths/Affidavits of an Australian State
or Territory
l) A member of an Australian Commonwealth, State or
Territory Parliament
m) A person who is enrolled on the roll of the Supreme Court
of a State or Territory, or the High Court of Australia, as
a legal practitioner
n) Notary public, including a notary public exercising
functions in an equivalent jurisdiction
o) A Person in an equivalent jurisdiction who is authorised
by law in that jurisdiction to administer oaths or
affirmations or to authenticate documents