Use Fill to complete blank online TEXAS SECRETARY OF STATE pdf forms for free. Once completed you can sign your fillable form or send for signing. All forms are printable and downloadable.

The form and the information provided are not substitutes (Texas Secretary of State) form is 2 pages long and contains:

Use our library of forms to quickly fill and sign your Texas Secretary of State forms online.

Form 2201 - Statement of Officer
(General Information)
The attached form is designed to meet minimal constitutional filing requirements pursuant to the relevant provisions. This
form and the information provided are not substitutes for the advice and services of an attorney.
Execution and Delivery Instructions
A Statement of Officer required to be filed with the Office of the Secretary of State is considered filed once it has
been received by this office.
Mail: P.O. Box 12887, Austin, Texas 78711-2887.
Overnight mail or hand deliveries: James Earl Rudder Officer Building, 1019 Brazos, Austin, Texas 78701.
Fax: (512) 463-5569.
Email: Scanned copies of the executed Statement may be sent to register@sos.texas.gov
NOTE: The Statement of Officer form, commonly referred to as the “Anti-Bribery Statement,” must be executed and
filed with the Office of the Secretary of State before taking the Oath of Office (Form 2204).
Commentary
Article XVI, section 1 of the Texas Constitution requires all elected or appointed state and local officers to take the
official oath of office found in section 1(a) and to subscribe to the anti-bribery statement found in section 1(b) before
entering upon the duties of their offices.
Elected and appointed state-level officers required to file the anti-bribery statement with the Office of the Secretary of
State include members of the Legislature, the Secretary of State, and all other officers whose jurisdiction is coextensive
with the boundaries of the state or who immediately belong to one of the three branches of state government. Questions
about whether a particular officer is a state-level officer may be resolved by consulting relevant statutes, constitutional
provisions, judicial decisions, and attorney general opinions. For more information, see Op. Tex. Att’y Gen. No. JC-
0575 (2002) (determining the meaning of “state officer” as it is used in Article XVI).
Effective September 1, 2017, Senate Bill 1329, which was enacted by the 85
th
Legislature, Regular Session, amended
chapter 602 of the Government Code to require the following judicial officers and judicial appointees to file their oath
and statement of officer with the secretary of state:
Officers appointed by the supreme court, the court of criminal appeals, or the State Bar of Texas; and
Associate judges appointed under Subchapter B or C, Chapter 201, Family Code.
Form 2201
1
Local officers must retain the signed anti-bribery statement with the official records of the office. As a general rule, city
and county officials do not file their oath of office with the Secretary of State– these officials file at the local level. The
Legislature amended the Texas Constitution, Article 16, Section 1, in November 2001 to no longer require local level
elected officials to file with our office. The Office of the Secretary of State does NOT file Statements or Oaths from
the following persons: Assistant District Attorneys; City Officials, including City Clerks, City Council Members,
Municipal Judges, Justices of the Peace, and Police/Peace Officers; Zoning/Planning Commission Members;
County Officials, including County Clerks, County Commissioners, County Judges, County Tax Assessors, and
District Clerks; and Officials of Regional Entities, such as, Appraisal Review Districts, Emergency Service Districts,
and School Districts (ISD’s).
Questions about this form should be directed to the Government Filings Section at (512) 463-6334 or register@sos.texas.gov
Revised 05/2020 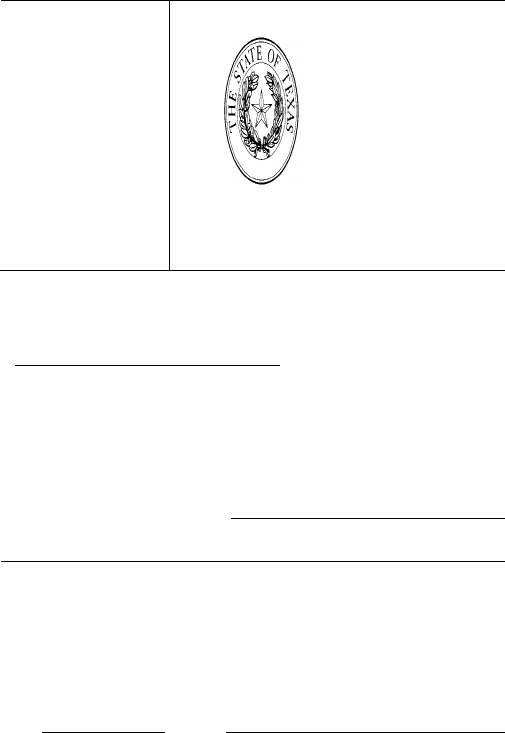 STATEMENT OF OFFICER
Form #2201 Rev. 05/2020
Submit to:
SECRETARY OF STATE
Government Filings
Section P O Box 12887
Austin, TX 78711-2887
512-463-6334
512-463-5569 - Fax
Filing Fee: None
Statement
I, , do solemnly swear (or affirm) that I have not
directly or indirectly paid, offered, promised to pay, contributed, or promised to contribute any money or
thing of value, or promised any public office or employment for the giving or withholding of a vote at the
election at which I was elected or as a reward to secure my appointment or confirmation, whichever the case
may be, so help me God.
Title of Position to Which Elected/Appointed:
Execution
Under penalties of perjury, I declare that I have read the foregoing statement and that the facts stated therein
are true.
Date:
Signature of Officer
Form 2201
2
Print
Reset