Document A: Reconcentration Camps By the late 1800s, (Stanford University)

The Document A: Reconcentration Camps By the late 1800s, (Stanford University) form is 4 pages long and contains:

STANFORD HISTORY EDUCATION GROUP sheg.stanford.edu
Document A: Reconcentration Camps
By the late 1800s, the Spanish were losing control of Cuba. Concerned about
insurrection in the countryside, they moved rural Cubans to “reconcentration”
camps where the Spanish claimed they would be better able to protect them.
U.S. Consul-General Fitzhugh Lee forwarded the following account of the
conditions of the camps to the U.S. Assistant Secretary of State on November
27, 1897. Lee said the author of the note was “a man of integrity and character.”
[W]e will relate to you what we saw with our own eyes:
Four hundred and sixty women and children thrown on the ground, heaped
pell-mell as animals, some in a dying condition, others sick and others
dead. . . .
There is still alive the only living witness, a young girl of 18 years, whom we
found seemingly lifeless on the ground; on her right-hand side was the
body of a young mother, cold and rigid, but with her young child still alive
clinging to her dead breast; on her left-hand side was also the corpse of a
dead woman holding her son in a dead embrace. . . .
The circumstances are the following: complete accumulation of bodies
dead and alive, so that it was impossible to take one step without walking
over them; the greatest want of cleanliness, want of light, air, and water;
the food lacking in quality and quantity what was necessary to sustain life. .
. . From all this we deduct that the number of deaths among the
reconcentrados has amounted to 77 per cent.
Source: Unsigned note that was included in a telegram sent by Fitzhugh
Lee, U.S. Consul-General in Cuba, to the U.S. Assistant Secretary of State
November 27, 1897.
Vocabulary
consul-general: a government
official living in a foreign country
charged with overseeing the
protection of U.S. citizens and
promoting trade
pell-mell: state of disorder
accumulation: pile
want: lack
reconcentrados: the reconcentration
camp prisoners

STANFORD HISTORY EDUCATION GROUP sheg.stanford.edu
Document B: March of the Flag
The following is an excerpt from Albert J. Beveridge’s speech, delivered September
16, 1898. Beveridge gave this speech while he was campaigning to become a
senator for Indiana. The speech helped him win the election and made him one of
the leading advocates of American expansion.
Fellow citizens, it is a noble land that God has given us; a land that can feed and clothe
the world;. . . . It is a mighty people that he has planted on this soil . . . It is a glorious
history our God has bestowed upon his chosen people; . . .a history of soldiers who
carried the flag across the blazing deserts and through the ranks of hostile mountains,
even to the gates of sunset. . . .
The Opposition tells us that we ought not to govern a people without their consent. I
answer: The rule of liberty that all just government derives its authority from the consent
of the governed, applies only to those who are capable of self-government. I answer,
We govern the Indians without their consent, we govern our territories without their
consent, we govern our children without their consent.
They ask us how we will govern these new possessions. I answer: If England can
govern foreign lands, so can America. If Germany can govern foreign lands, so can
America. . . .
What does all this mean for every one of us? It means opportunity for all the glorious
young manhood of the republic, the most virile, ambitious, impatient, militant manhood
the world has ever seen. It means that the resources and the commerce of these
immensely rich dominions will be increased. . . .
In Cuba, alone, there are 15,000,000 acres of forest unacquainted with the axe. There
are exhaustless mines of iron. . . . There are millions of acres yet unexplored. . . . It
means new employment and better wages for every laboring man in the Union. . . .
Ah! as our commerce spreads, the flag of liberty will circle the globe. . . . Benighted
peoples will know that the voice of Liberty is speaking, at last, for them; that civilization
is dawning, at last, for them. . . .
Fellow Americans, we are God’s chosen people. . . .
Source: Albert J. Beveridge’s Senate campaign speech, September 16, 1898.
Vocabulary
virile: having strength and energy
militant: aggressive
dominions: controlled territories
benighted: pitifully ignorant

STANFORD HISTORY EDUCATION GROUP sheg.stanford.edu
Guiding Questions Name___________
Document A: Reconcentration Camps
1. Sourcing: Given that in the U.S. there was an ongoing debate about whether the U.S. should
intervene in Cuba, why might Lee have chosen to send this account to Washington?
2. Close Reading: Notice the graphic descriptions of the account. How do these details about
the camp conditions affect you as you read? Why might these descriptions be so detailed?
3. Contextualization: How do you think U.S. government officials might have reacted to this
description of the reconcentration camps?
Document B: March of the Flag
1. Sourcing: This speech is part of a political campaign. How does that influence what you can
expect of it?
2. Close Reading: What do the following phrases suggest about Beveridge’s view of Americans
as compared with people of other nations?
a) “noble land that God has given us”
b) “applies only to those who are capable of self-government”
c) “civilization is dawning, at last, for them”
3. Contextualizing: According to Beveridge, what else was going on in the U.S. and the rest of
the world that made expansion a good idea? 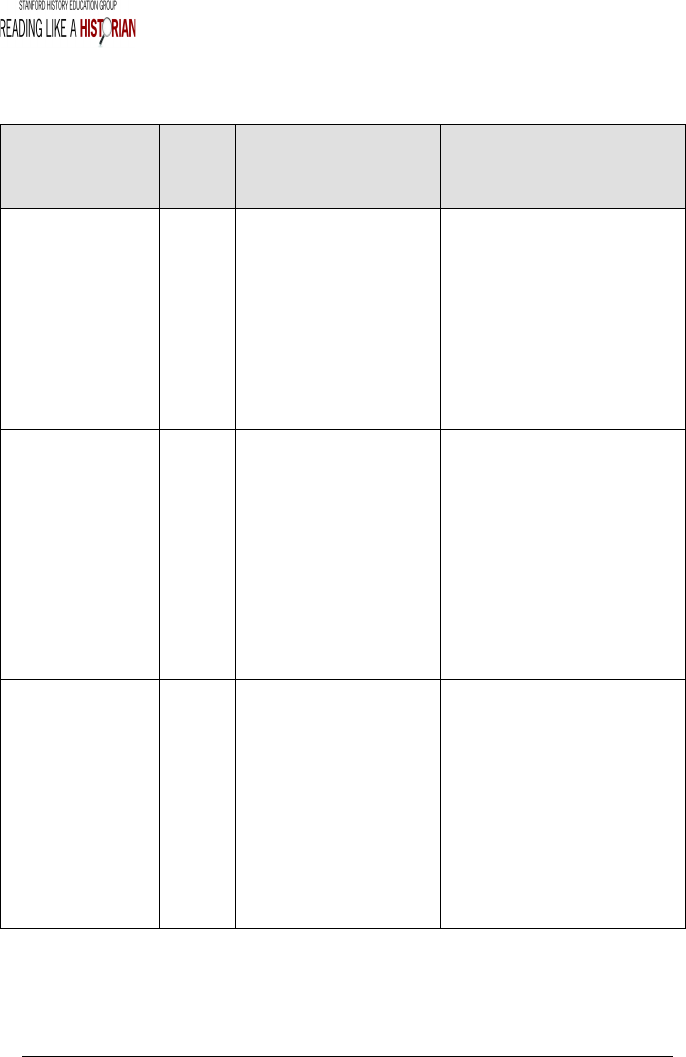 Document A: Reconcentration Camps By the late 1800s, (Stanford University)