The City of Bowie Hall of Honor Purpose Eligibility form is 4 pages long and contains:

City of Bowie
Hall of Honor
Purpose
The Hall of Honor is the City of Bowie’s manner of honoring those persons who have made major and lasting
contributions to the City. This contribution can be in any form or area of endeavor.
Eligibility Requirements
1. Nominee must be deceased for at least one year as of the nomination deadline.
2. The nominee must have made both a major and lasting contribution directly to the City of Bowie.
Contributions made to Prince George’s County, as a whole, and/or the State of Maryland, do not qualify.
3. The nominee must have been a resident of the City of Bowie either during the time of their contribution or at
the time of their death.
Nomination Procedure
1. Nominations can be submitted by any individual, Bowie resident or not, providing that the person submitting
the nomination does not fit within any of the following categories:
a. City of Bowie Employee
b. City of Bowie Elected Official
c. City of Bowie Community Outreach Committee Member
2. Nominations will be reviewed by the Community Outreach Committee.
3. Each nomination must include the following:
a. A completed nomination form
b. A letter from the nominator explaining specific contributions made by the nominee to the City of Bowie
and outlining the effects these contributions have had on the community.
c. Three letters of reference from individuals, in addition to the nominator, confirming the nominee’s
contributions to the City of Bowie. No more than one of these letters may be from a family member of the
nominee. None of these may be from a family member of the nominator.
4. Nominators are encouraged to include other pertinent information regarding the nominee, such as newspaper
clippings, videos, photographs, etc. However, these materials will not be accepted after the deadline.
5. Upon review of the nominations, inductee recommendations will be forwarded to the City Council for a final
decision.
6. Nominations forms must be submitted to:
Bowie City Hall
15901 Excalibur Road
Bowie, MD 20716
Attn: Hall of Honor
Nominations must be received no later than 5:00 PM on Monday, March 8, 2021.
Nomination forms received after the deadline will be held and considered in the selection process for the
following year.
Please direct any questions to Matt Corley, Special Events Manager, at 301-809-3078 or email mcorley@cityofbowie.org
Please note: At no time during the nomination or reviewing process will the Committee hear testimony from the
nominator or any of the references regarding the nominee. However, the Committee reserves the right to contact either
nominators or references for clarification of information included in the nomination
. 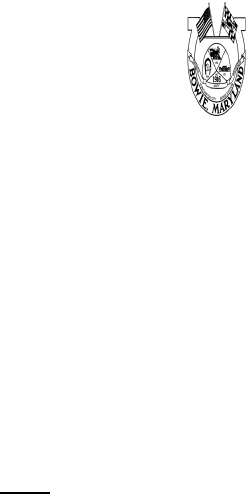 City of Bowie
Hall of Honor
Selection Process
1. Nominations received after the deadline will be held and considered in the selection process for the
following year.
2. Upon closure of accepting nominations, additional materials will not be accepted. All materials
must be submitted with the nomination form by the deadline stated in the “Nomination Procedure.”
3. Nomination forms will be reviewed and discussed at a meeting of the Community Outreach
Committee.
4. At no time during the nomination or reviewing process will the Community Outreach Committee
hear testimony from the nominator or any of the references regarding the nominee. However, the
Committee reserves the right to contact either nominators or references for clarification of
information included in the nomination.
5. Upon discussion and review of each nominee, the Community Outreach Committee will vote, by
secret ballot, to determine which nominees will be recommended for induction. A quorum must be
present for this vote to occur and the recommendations will be based on a simple majority.
6. The recommendation from the Community Outreach Committee will be submitted by staff to the
City Council as soon as practical for their concurrence or denial.
7. A reception(s) honoring the inductee(s) will occur in 2021.