Use Fill to complete blank online DEPARTMENT OF THE ENVIRONMENT AND ENERGY pdf forms for free. Once completed you can sign your fillable form or send for signing. All forms are printable and downloadable.

The SENTENCING OPTIONS Getting started Learning outcomes When imposing (Department of the Environment and Energy) form is 2 pages long and contains:

Use our library of forms to quickly fill and sign your Department of the Environment and Energy forms online.

BROWSE DEPARTMENT OF THE ENVIRONMENT AND ENERGY FORMS

1
|
Queensland Sentencing Advisory Council
When imposing a sentence on a defendant, a
magistrate or judge has a range of sentencing
options.
Learning outcomes
Students will:
• describe key terms using legal terminology,
including custodial and non-custodial
• describe the range of sentencing options, including
nes, good behaviour bonds, probation, suspended
sentence, community service orders, intensive
correction orders and imprisonment
• evaluate, using legal criteria, the effectiveness of
sentences and punishment
Focus question
What different types of sentencing options exist
in Queensland?
How effective are different types of
sentencing options?
Key concepts
community service order
custodial sentence
ne
good behaviour
imprisonment
intensive correction order
non-custodial sentence
probation
suspended sentence
Getting started
Write a list of sentencing options. Ask students which
one they think is the most commonly used? Why?
From the same list of sentencing options, ask students
to identify which ones are custodial and which ones
are non-custodial. Why is it important that judges have
a range of sentencing options?
Ask students to generate a list of ways you could judge
whether a sentence is effective or not (this will be
useful later on).
Curriculum links
This learning resource has been developed for
students studying Legal Studies 2019 (General Senior
Syllabus) in Year 11.
It ties in with Unit 1: Beyond reasonable doubt, Topic 4:
Punishment and sentencing.
Further resources
The following websites may further enhance the
learning outcomes associated with this resource:
Caxton Legal Centre Inc.,
The Queensland Law Handbook
Legal Aid Queensland,
Possible penalties and sentences
Queensland Government,
Types of sentences
Queensland Sentencing Advisory Council,
Queensland Sentencing Guide
Queensland Sentencing Advisory Council,
Sentencing adult offenders
SENTENCING OPTIONS
In some instances, the language used in these resources reects that of the relevant educational syllabus as opposed to terms commonly used in
Queensland legislation. For instance, the word ‘retribution’ is used in the syllabus, although ‘punishment’ is the closest equivalent used in legislation. 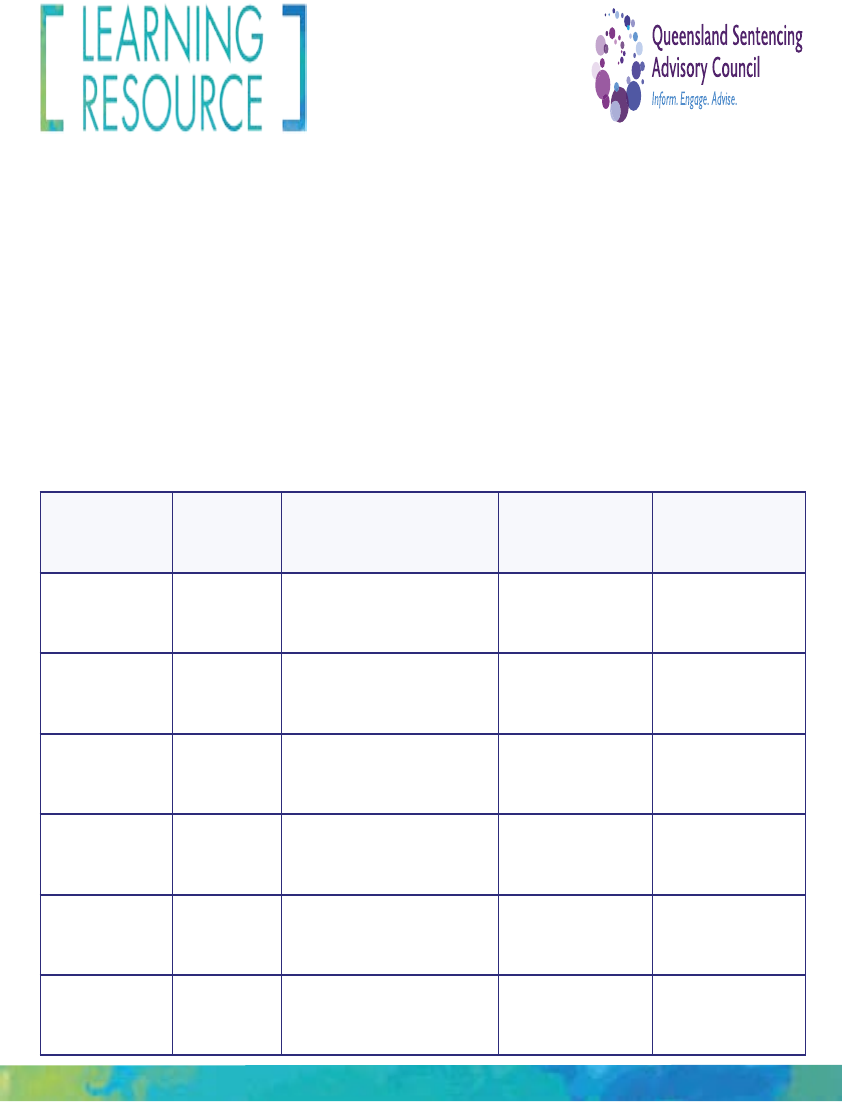 1
|
Queensland Sentencing Advisory Council
SENTENCING OPTIONS
Your turn
Construct an extended response of at least 250 words that recommends whether nes should
continue to be used as a sentencing option.
When evaluating the use of nes as a sentencing option, use legal criteria.
Possible criteria you may wish to include as part of your response are:
• the elements of the rule of law (law is applied equally and fairly, it is capable of being
known by everyone, the law and its administration is subject to open and free criticism,
there is separation of powers, there is judicial discretion, the judicial system is impartial
and independent, the rights of the accused and victim are upheld)
• the features of an effective law (such as the law is known, capable of being enforced,
represents and is accepted by the people, clear, stable, able to be changed, applied
consistently and is able to resolve disputes)
• the law meets its objectives or purpose
• the law doesn’t adversely or inequitably impact a specic group of people in society
• the law supports just and equitable outcomes
• the law reects our human rights
© Queensland Sentencing Advisory Council 2020
Published May 2020
3
|
Queensland Sentencing Advisory Council