On average this form takes 49 minutes to complete

2
PRELAB EXERCISES
Open the Human Anatomy Atlas app, choose Views from the top menu, and select Systems from the
submenu. Then, scroll down to the Respiratory System Views.
You are responsible for the identification of all bold terms.
A. Select Respiratory System View 1. Upper Respiratory System.
In the system tray on the left side of the screen, deselect the integumentary system icon to remove
the skin and hair from the view. Rotate the view as needed to examine the upper respiratory system
structures and note where they are located.
Pharynx
Larynx
Nasal cavity 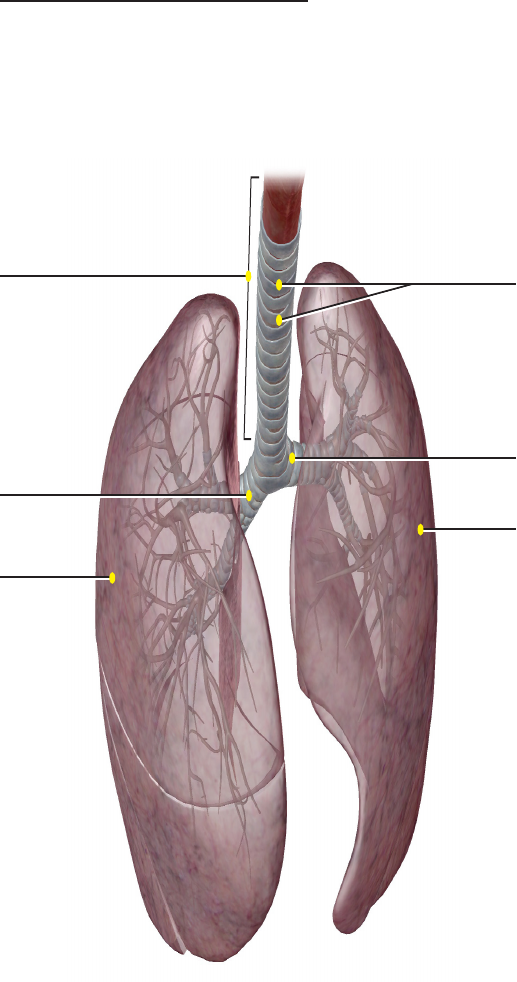 5
B. Select Respiratory System View 7. Location of the Lungs.
In the system tray on the left side of the screen, deselect the skeletal system icon to remove the
thoracic cage and other skeletal structures from the view. Rotate the view as needed to examine
the lower respiratory system structures and note where they are located.
Right lung
Right bronchus
Trachea
Left lung
Left bronchus
Tracheal rings

6
Right inferior lobe
Right hilum of lung
Right middle lobe
Right superior lobe
Right main bronchus
Left inferior
lobe
Left superior lobe
Left main bronchus
Left hilum of the lung
Left primary bronchus
Left tertiary
bronchi
Left secondary
bronchi
7
1. What structures comprise the lower respiratory system, from superior to inferior?
2. Select the trachea and use the book icon to read about it. What is the structure and function of the
trachea and the tracheal rings?
3. In the system tray on the left side of the screen, deselect all the blue system icons except
respiratory. Then, select and hide one of the lungs. Examine the bronchi.
a. In terms of size and structure, what is the difference between primary, secondary, and
tertiary bronchi?
b. What are the tiny structures that appear at the ends of the tertiary bronchi, and what is their
function?
4. In the system tray on the left side of the screen, deselect and select the respiratory system icon to
refresh the respiratory structures in the view, and examine the lungs.
a. What differences do you notice between the left and right lungs?
b. What are the lines on the surface of the lungs called?
c. On the medial aspect of the lungs, what is the name of the region where the bronchi enter the
lung? What else enters the lung via this region? 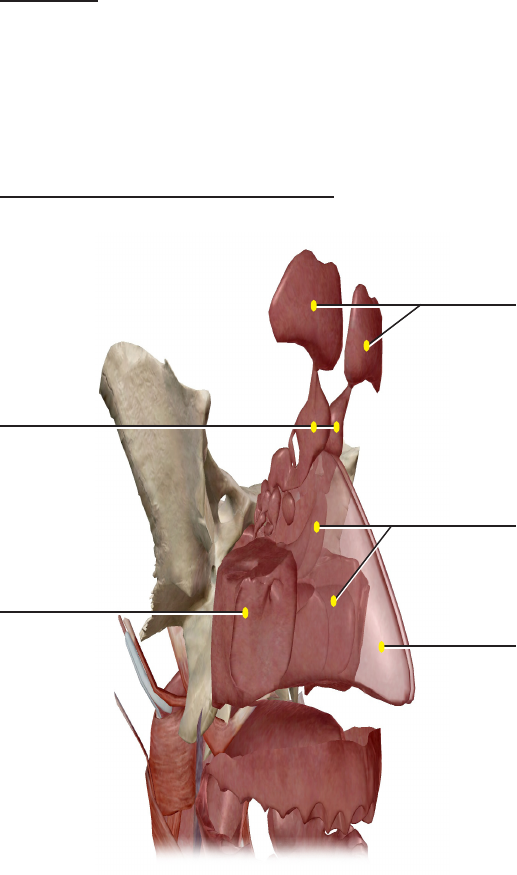 9
3. In the pictures below, compare the nasal conchae (turbinates) of a dog (top) versus those of a
human (bottom). 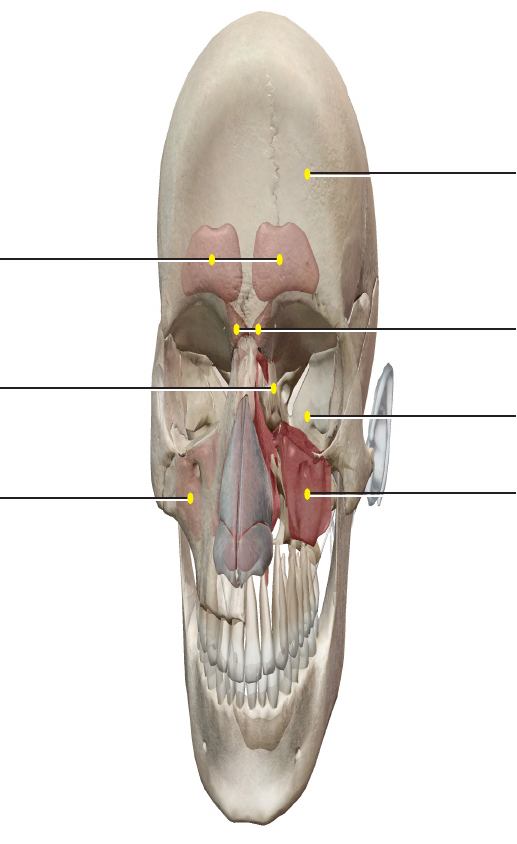 10
Right maxillary bone
Ethmoid bone
Frontal sinuses
Maxillary sinus
Sphenoid bone
Frontal bone
Ethmoid sinuses
Why do you suppose the nasal conchae of the dog are much larger and more extensive than those of
the human?
4. Select the large cubic-shaped chambers located on either side of the nasal cavity.
a. What are these chambers called?
b. Select the book icon. What 4 bones contain paranasal sinuses?
c. What are the functions of these sinuses? 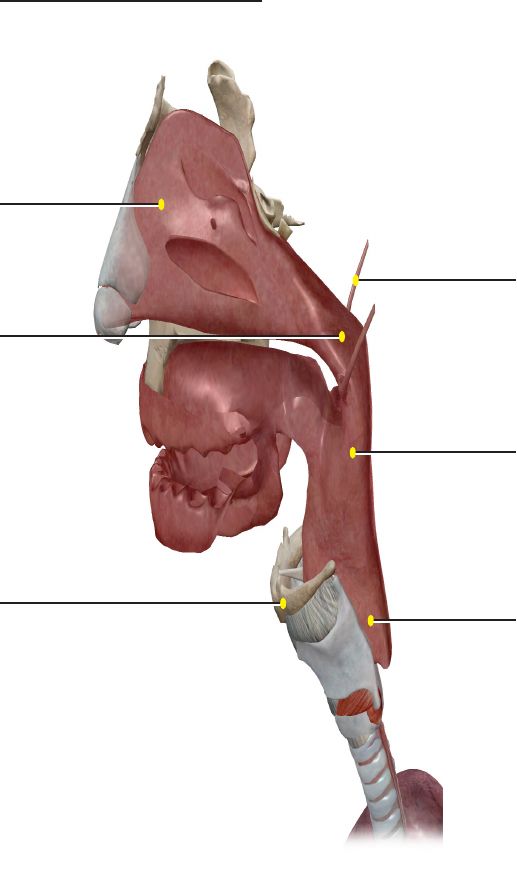 11
B. Select Respiratory System View 2. Nasal Cavity.
Nasal cavity
Nasopharynx
Hyoid bone
Laryngopharynx
Oropharynx
Right eustachian tube (auditory)
Rotate the view as needed to observe the nasal cavity and nasal conchae.
1. Rotate to a lateral or posterior view.
a. Identify and select the nasopharynx. Find and select the 2 other sections of the pharynx.
What are they called?
b. What is the name of the tube that exits superolaterally from the nasopharynx?
c. What is the function of this tube?

12
2. Rotate back to the anterior view.
a. What is the name of the bone located anterior to the laryngopharynx?
b. What is the function of this bone and what makes it unique and different from all the other
bones in the body?
TIME TO PRACTICE!
GO TO THE QUIZZES MENU, SCROLL DOWN TO THE RESPIRATORY SYSTEM, AND COMPLETE
QUIZZES 2 UPPER RESPIRATORY AND 5 NASAL CAVITY. 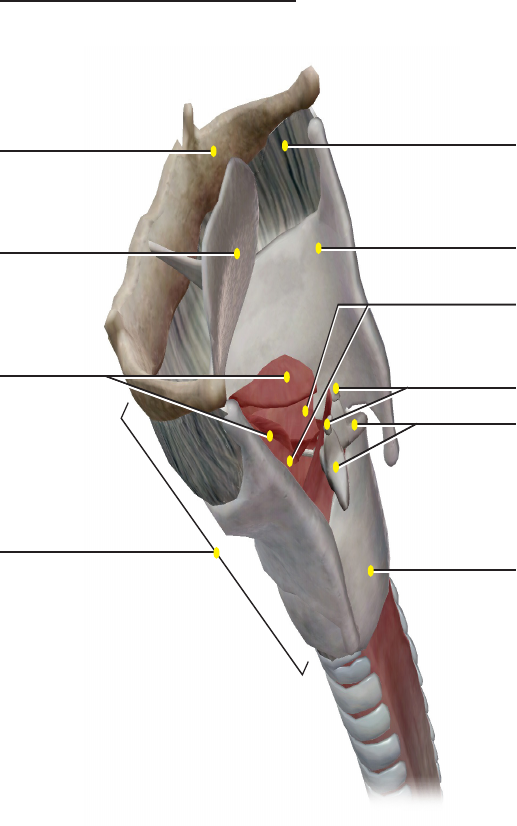 13
C. Select Respiratory System View 6. Laryngeal Muscles.
Observe the various cartilages and membranes located below the hyoid bone.
1. Select the largest cartilage structure of the larynx and use the book icon to read about it and the
other laryngeal cartilages.
a. What is the group of cartilages and membranes known as?
b. What is the largest cartilage of the larynx called?
c. What is it more colloquially (commonly) known as?
Hyoid bone
Epiglottis
Laryngeal skeleton
Vestibular folds
Cricoid cartilage
Arytenoid cartilages
Corniculate cartilages
Thyrohyoid membrane
Thyroid cartilage
Vocal folds
14
d. What is the name of the membrane between the hyoid bone and the thyroid cartilage?
e. What is the name of the only laryngeal or tracheal cartilage that extends all the way around the
larynx?
f. What is the function of the laryngeal skeleton?
g. Select the large, flap-like piece of cartilage behind the hyoid bone. What is this structure called,
and what is its function?
2. In the system tray on the left side of the screen, deselect the muscular system icon to remove the
muscles from the view. Rotate the view to a posterior view of the larynx. Locate and select the vocal
folds and use the Radius Blast button.
a. Compare the location of the vocal folds and vestibular folds. What is an alternate name for
each of these structures, and what are their functions?
b. What is the name of the pyramid-shaped cartilages that sit on top of the cricoid cartilage and
attach posteriorly to the vocal ligaments?
c. What are the names of the small cartilages that are located on top of the cartilages from
question b?
d. Select the trachea (windpipe). Notice the cartilaginous rings located along its anterior and
lateral surfaces. What is the function of these rings?

15
e. In the system tray on the left side of the screen, select the digestive system icon to add the
digestive structures to the view. What is the name of the tube that is located just dorsal to the
trachea? Why do you think this tube does not have cartilage rings like the trachea?
TIME TO PRACTICE!
GO TO THE QUIZZES MENU, SCROLL DOWN TO THE RESPIRATORY SYSTEM,
AND COMPLETE QUIZ 7 LARYNX. 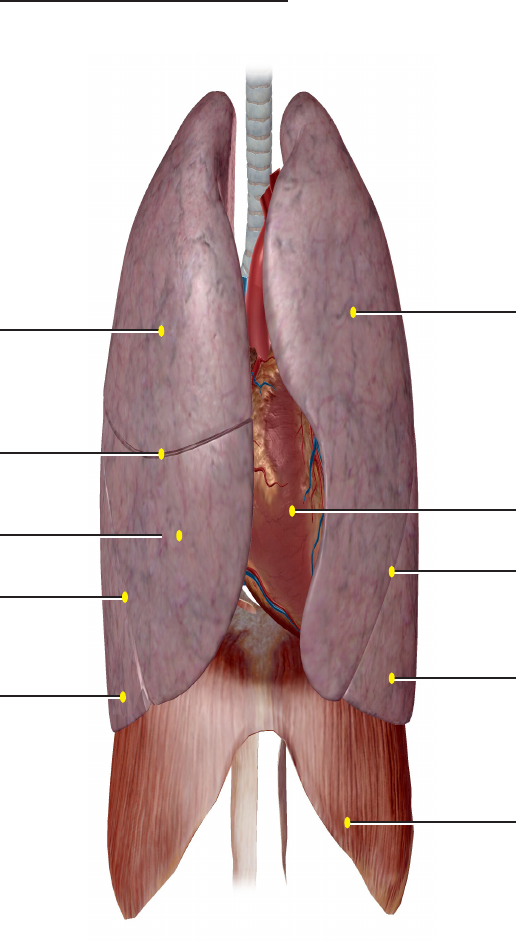 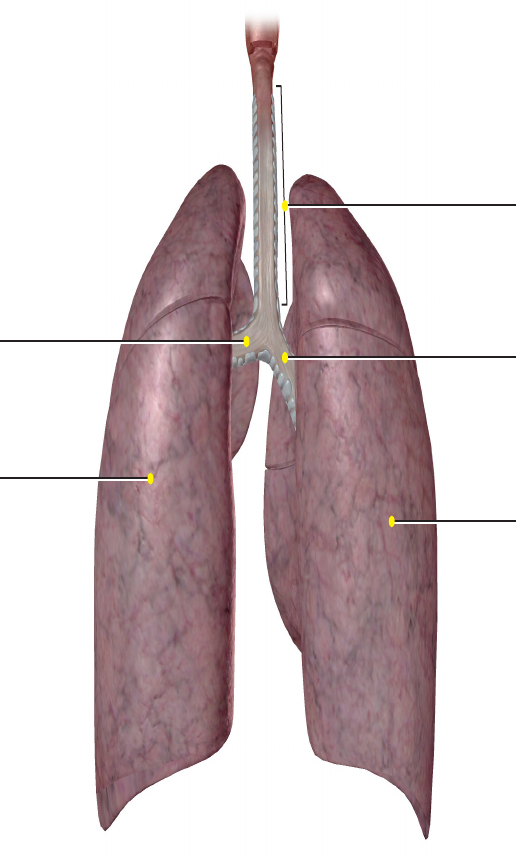 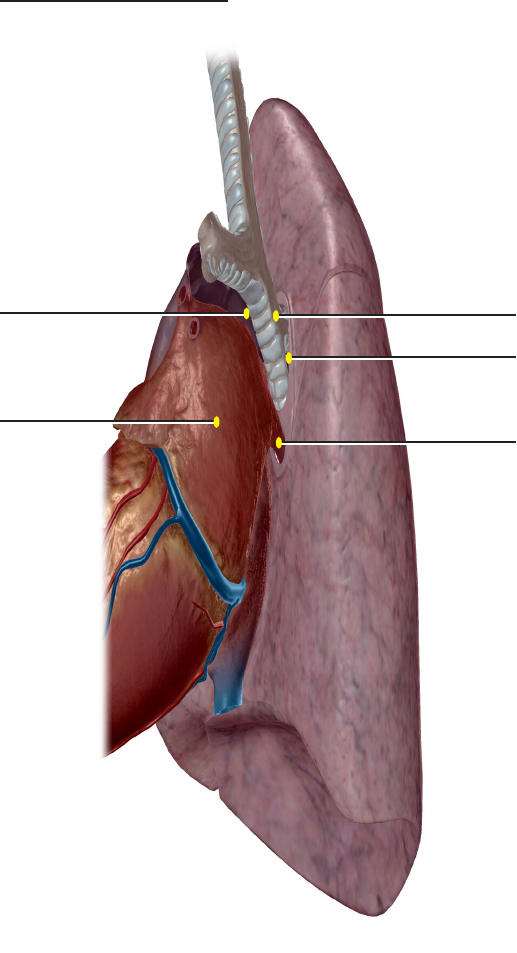 19
E. Select Respiratory System View 8. Hilum.
1. Rotate the view as needed to find and select the hilum.
a. What are the 3 main structures that penetrate the hilum?
b. What other structures do you think pass through the hilum and into the lungs?
2. Click on any part of the lung and use the book icon to read about the lungs. Complete the following
paragraph.
Heart
Pulmonary artery
Pulmonary vein
Right hilum of lung
Right primary bronchus 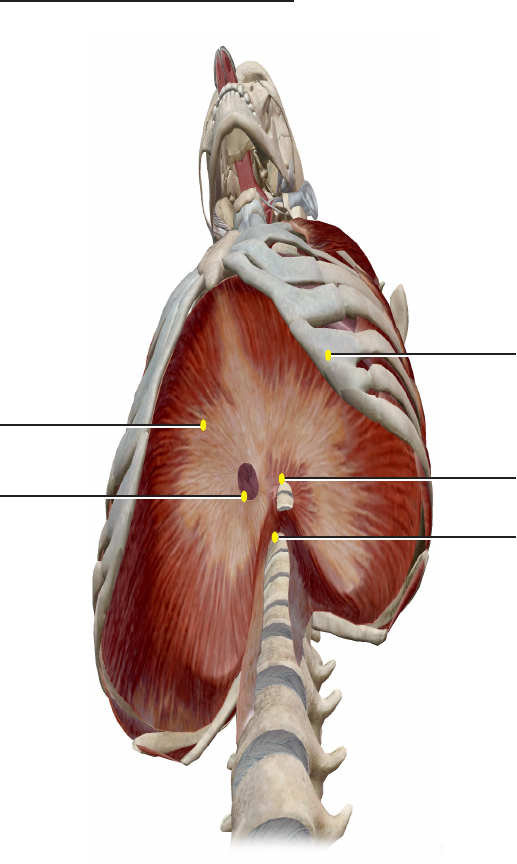 21
F. Select Respiratory System View 9. Inhalation Muscles.
Diaphragm
Opening for inferior
vena cava
Opening for
esophagus
Opening for
abdominal aorta
Rib cage
1. Rotate to the inferior view and select the diaphragm. Observe its location and shape.
a. How many apertures (openings) do you see in the diaphragm?
b. What major structures pass through these openings?
2. With the diaphragm selected, use the book icon to read about it. Then, return to the Views screen,
choose Muscle Actions from the submenu, and select the Ribs Elevation animation. Observe the motion
of the diaphragm.
22
a. What happens to the dome-shaped diaphragm as it contracts? What happens to the rib cage?
b. What effect does diaphragm contraction have on the volume of the thoracic cavity and
lungs?
c. What do you think happens to the pressure inside the lungs due to this volume change?
d. Do you think this will cause air to move into or out of the lungs?
e. Name 5 other muscles that may contribute to elevation of the rib cage for inhalation. 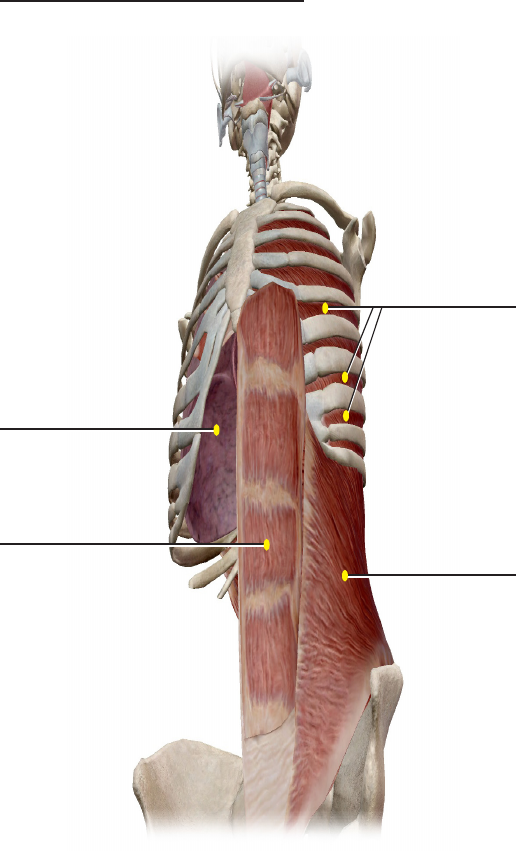 25
H. Select Respiratory System View 11. Respiratory Innervation.
Rotate to the inferior view. Zoom in on the diaphragm and select the nerve branches visible on
the inferior surface.
1. What is the name of this nerve?
2. With the nerve still selected, rotate and zoom the view to follow the nerve back to the spinal cord.
What level(s) of the spinal cord is the origin of this nerve?
3. Explain how an injury to the neck might cause someone to require an artificial respirator to breathe?
TIME TO PRACTICE!
GO TO THE QUIZZES MENU, SCROLL DOWN TO THE RESPIRATORY SYSTEM, AND COMPLETE
QUIZZES 1 OVERVIEW, RESPIRATORY AND 3 LOWER RESPIRATORY.
Right phrenic nerve
Diaphragm
Left phrenic nerve
Left lung 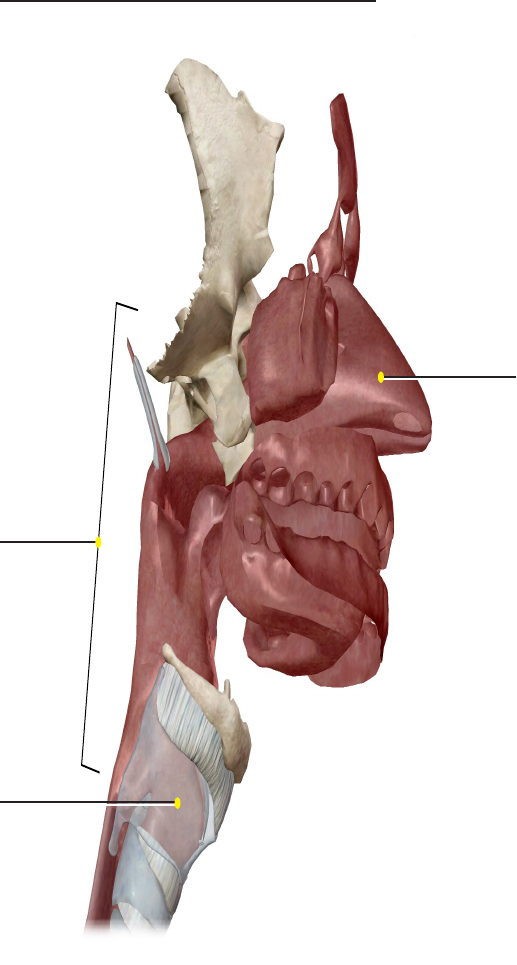 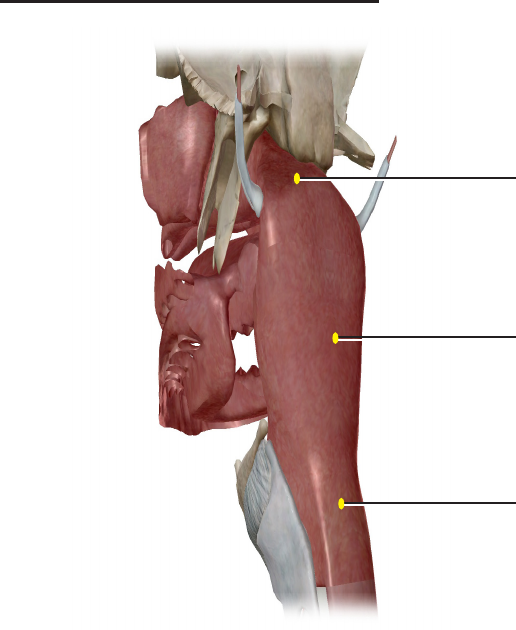 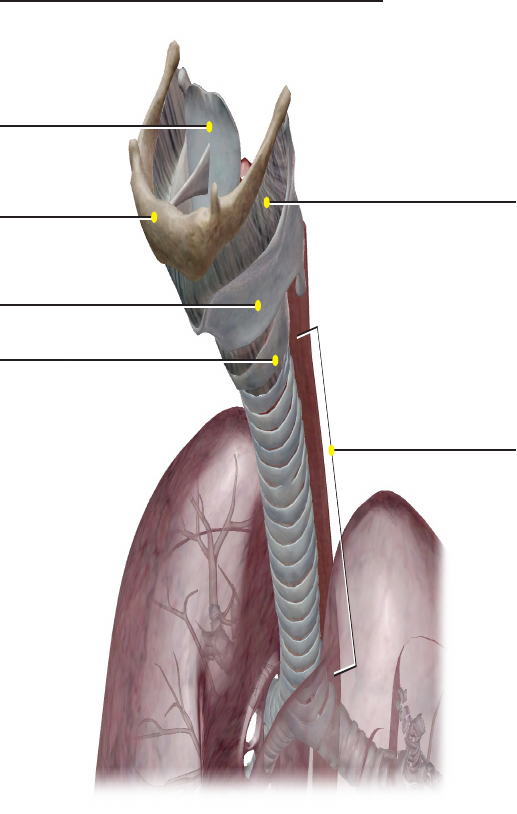 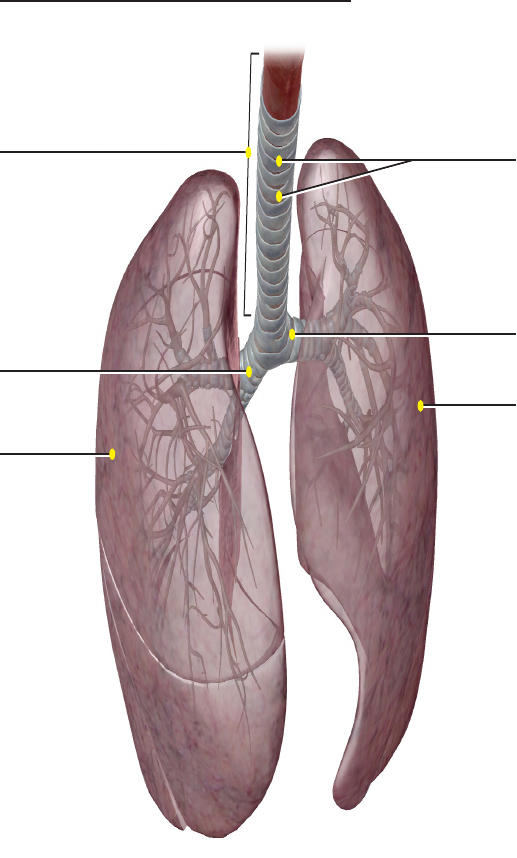 32
Source: Respiratory System Views: View 7: Location of the Lungs (I) 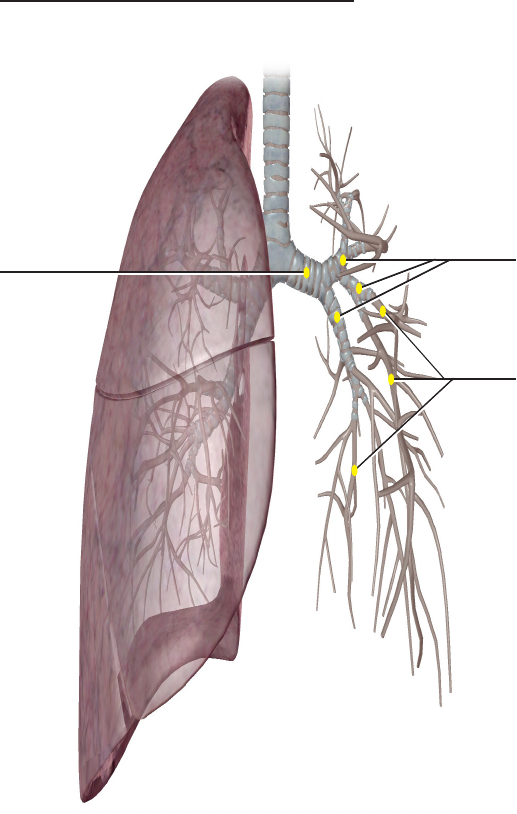 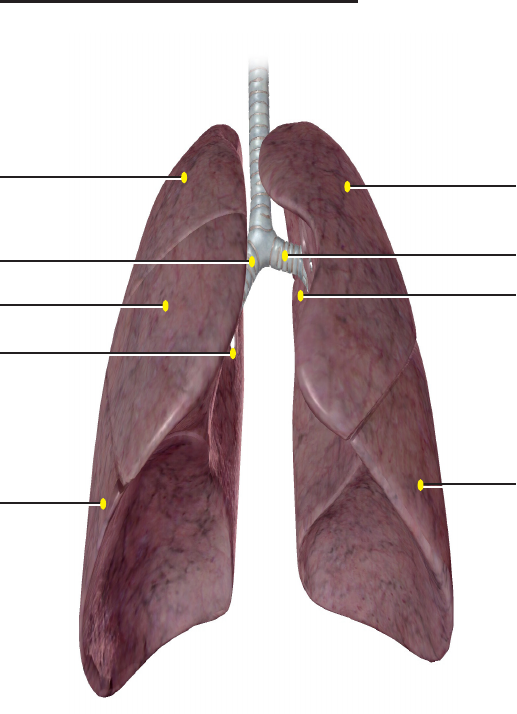 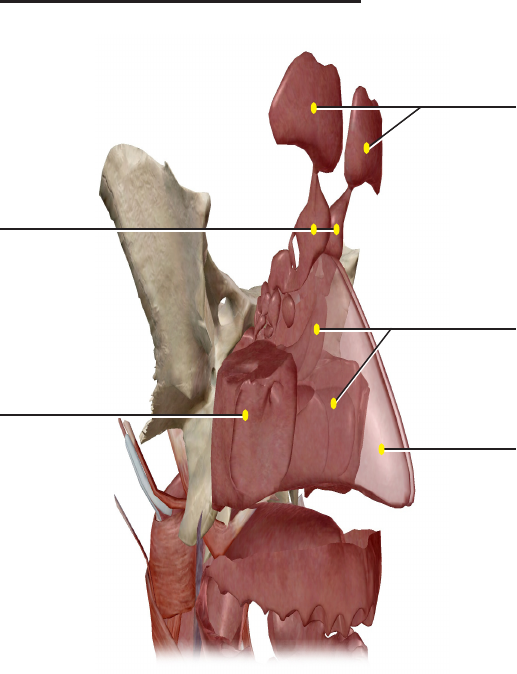 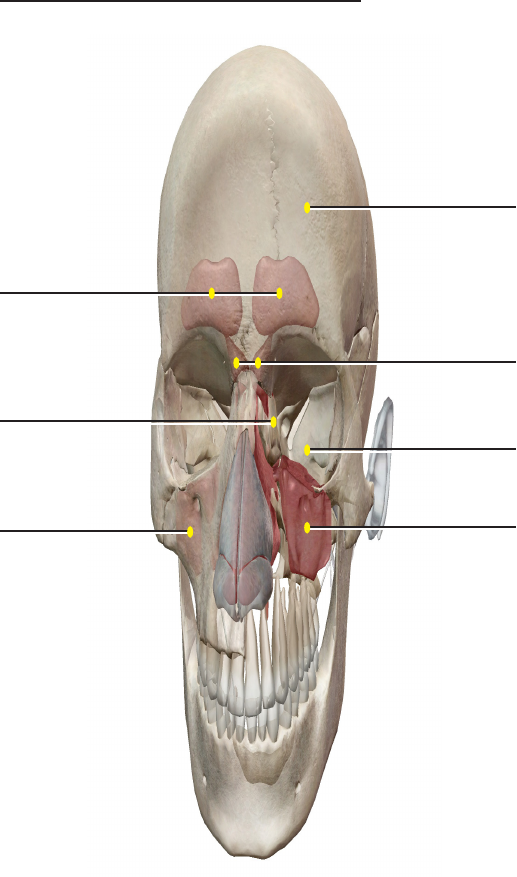 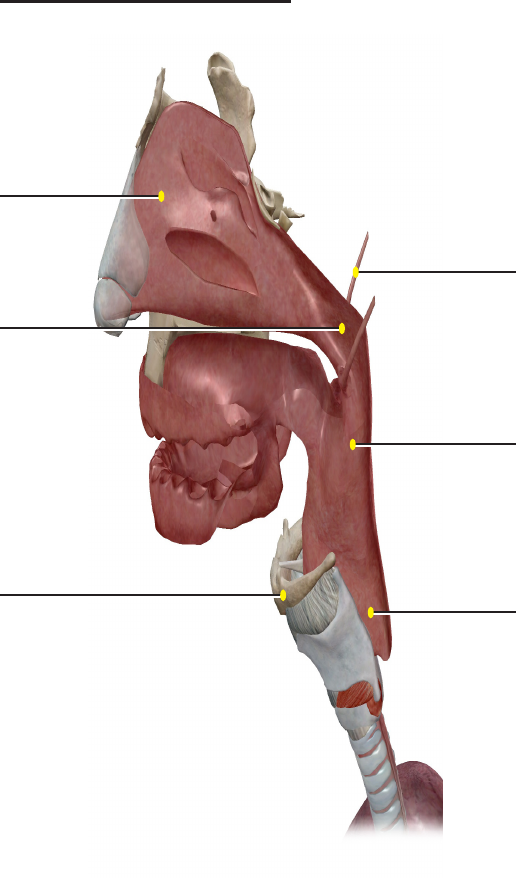 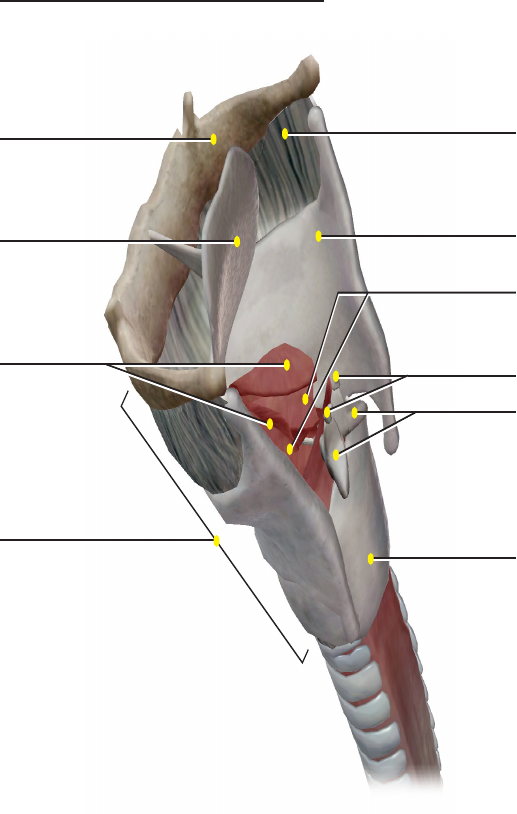 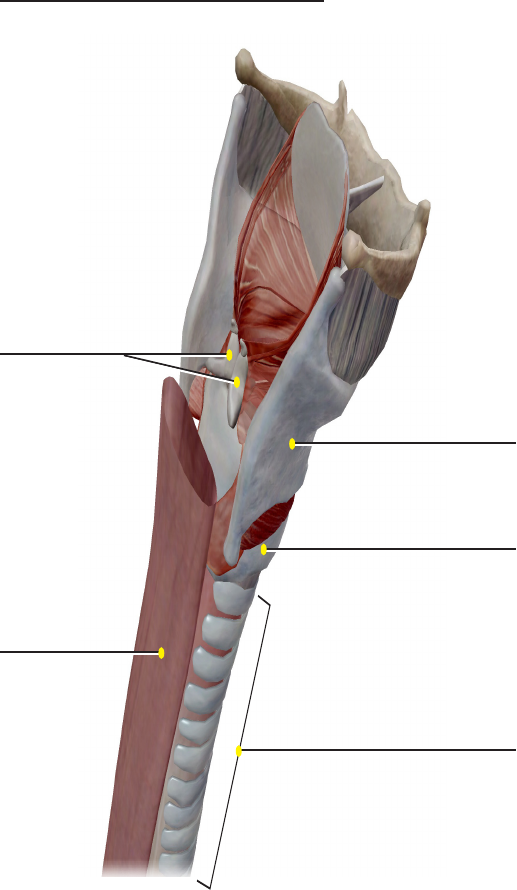 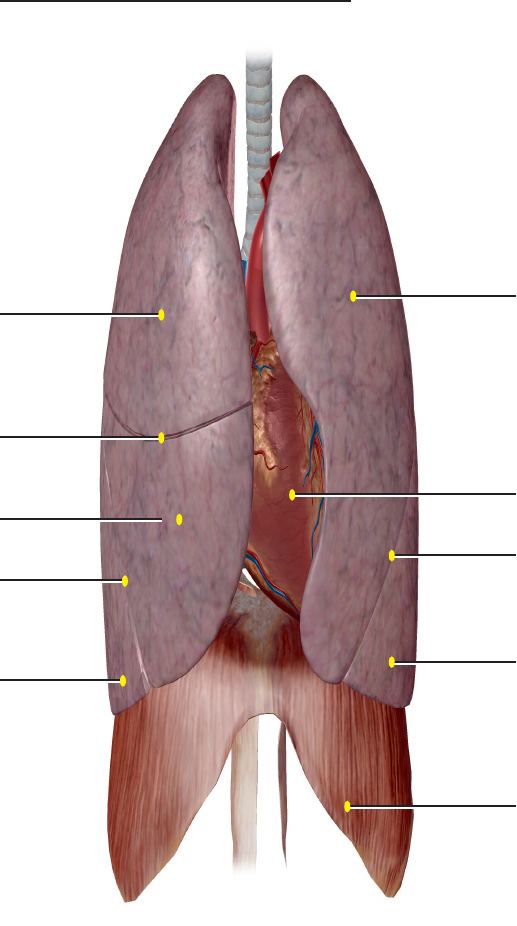 40
Source: Respiratory System Views: View 7: Location of the Lungs (I) 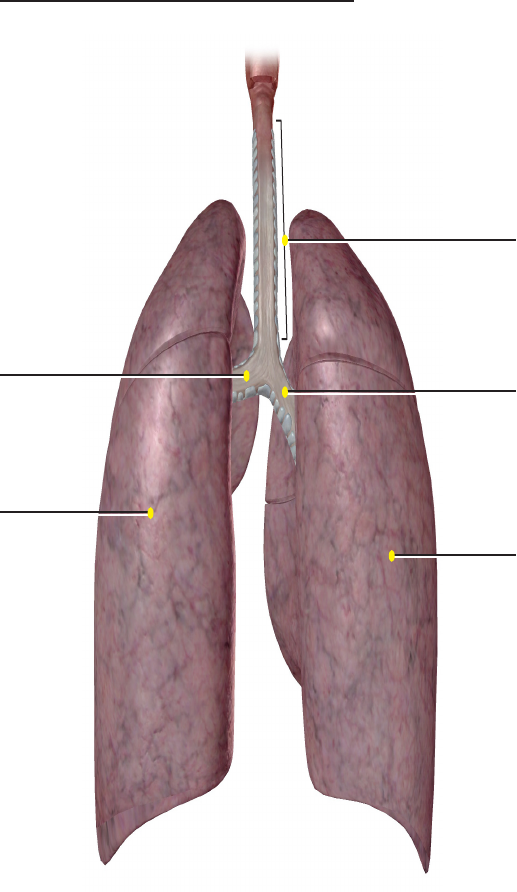 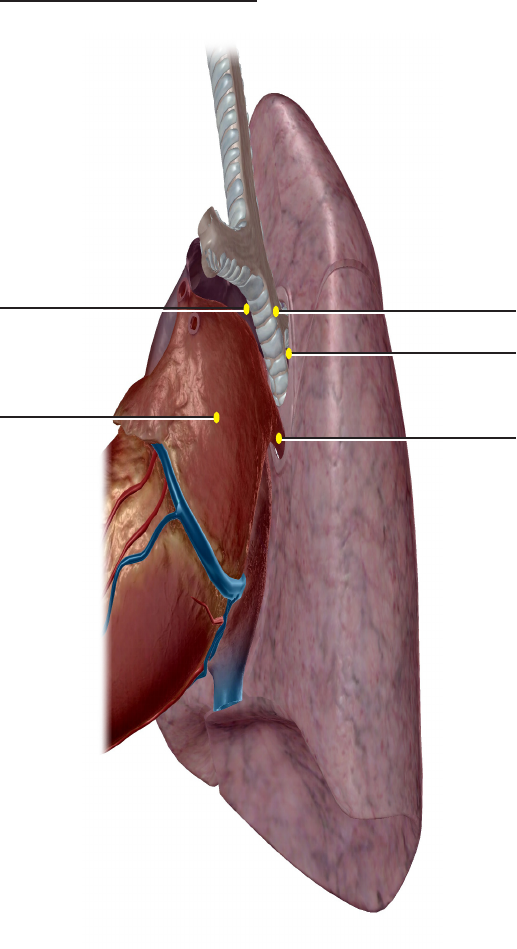 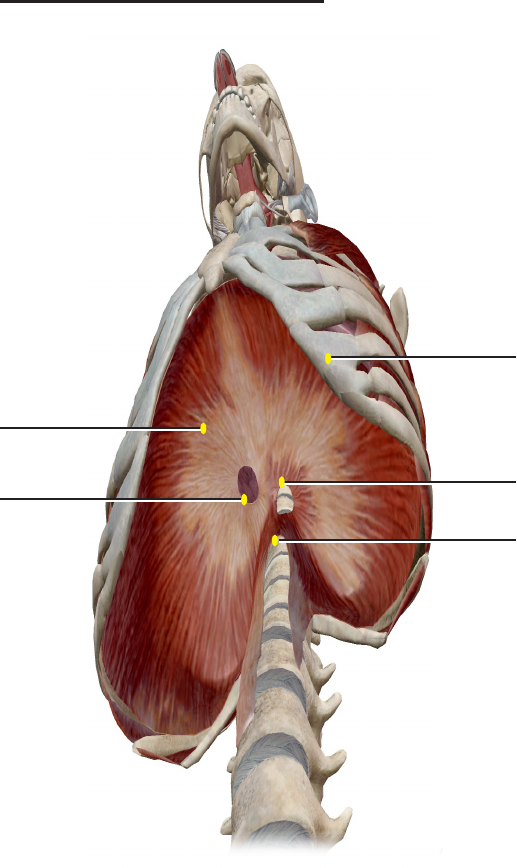 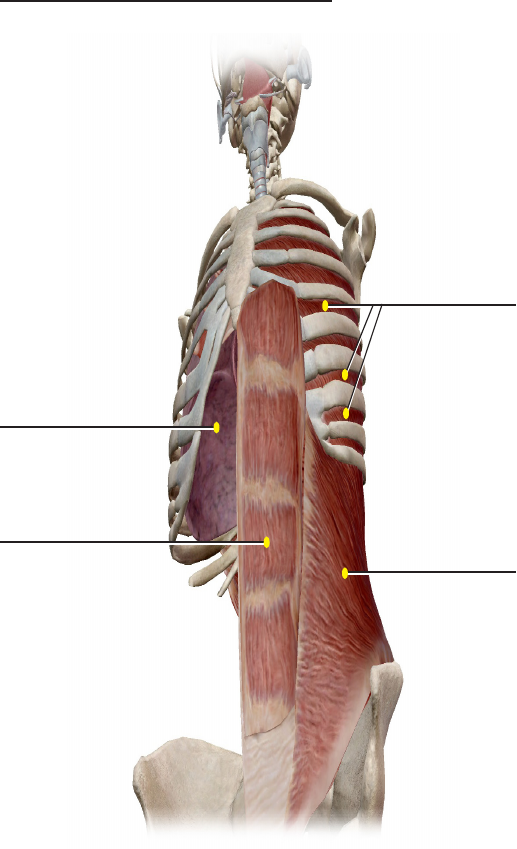 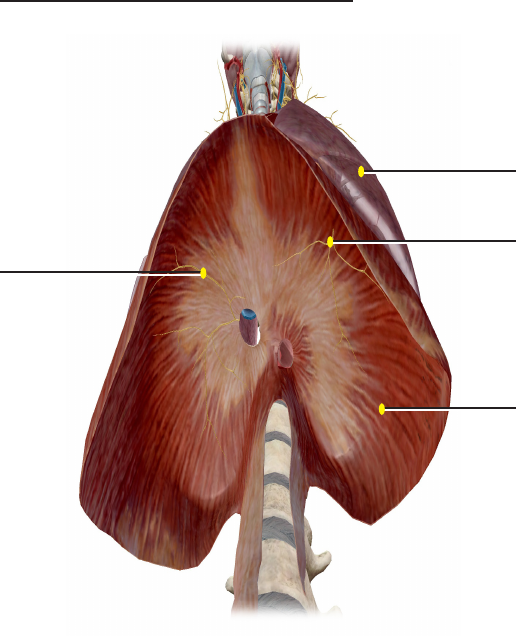 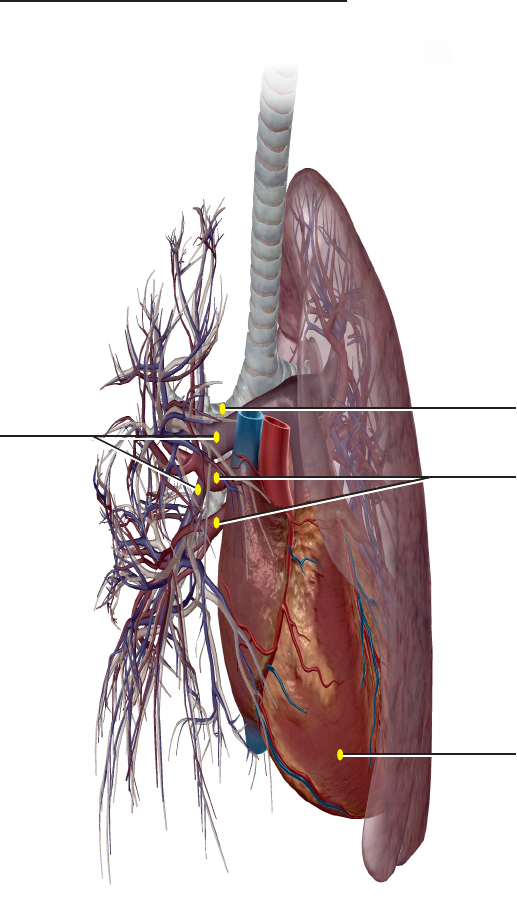