Chapter 13: Work and Energy 425
VOCABULARY
potential energy p. 426
kinetic energy p. 426
mechanical energy p. 429
conservation of energy
p. 430
BEFORE, you learned
•Work is the use of force to
move an object
•Work can be calculated
NOW, you will learn
• How work and energy
are related
• How to calculate mechanical,
kinetic, and potential energy
• What the conservation of
energy means
KEY CONCEPT
Energy is transferred
when work is done.
TH
I
NK ABOUT
How is energy transferred?
School carnivals sometimes
include dunk tanks. The goal
is to hit a target with a ball,
causing a person sitting over
a tank of water to fall into the
water. You do work on the
ball as you throw with your
arm. If your aim is good, the
ball does work on the target. How do
you transfer your energy to the ball?
Work transfers energy.
When you change the position and speed of the ball in the carnival
game, you transfer energy to the ball. Energy is the ability of a person
or an object to do work or to cause a change. When you do work on an
object, some of your energy is transferred to the object. You can think
of work as the transfer of energy. In fact, both work and energy are
measured in the same unit, the joule.
The man in the photograph above converts one form of energy
into another form when he uses his muscles to toss the ball. You can
think of the man and the ball as a system, or a group of objects that
affect one another. Energy can be transferred from the man to the
ball, but the total amount of energy in the system does not change.
check your reading How are work and energy related?
MAIN IDEA WEB
Remember to add boxes
to your main idea web
as you read.
Page 1 of 8

428 Unit 3: Motion and Forces
Calculating Kinetic Energy
The girl on the swing at left has kinetic energy. To find out how much
kinetic energy she has at the bottom of the swing’s arc, you must
know her mass and her velocity. Kinetic energy can be calculated
using the following formula:
Kinetic Energy =

mass

v
2
elocity
2

KE =

1
2

mv
2
Notice that velocity is squared while mass is not. Increasing the
velocityofan object has a greater effect on the object’s kinetic energy
than increasing the mass of the object. If you double the mass of an
object, you double its kinetic energy. Because velocity is squared, if
you double the object’s velocity, its kinetic energy is four times greater.
Sample Problem
Practice the Math
Calculating Kinetic Energy
What is the kinetic energy of a girl who has a mass of 40 kg and a
velocity of 3 m/s?
What do you know? mass = 40 kg, velocity = 3 m/s
What do you want to find out? Kinetic Energy
Write the formula: KE =

1
2

mv
2
Substitute into the formula: KE = p 40 kg p (3 m/s)
2
Calculate and simplify: KE = p 40 kg p
=
= 180 kg p m
2
/s
2
Check that your units agree: = p m = Npm = J
Unit of energy is J. Units agree.
Answer: KE = 180 J
1. A grasshopper with a mass of 0.002 kg jumps up at a speed of 15 m/s.
What is the kinetic energy of the grasshopper?
2. A truck with a mass of 6000 kg is traveling north on a highway at a speed
of 17 m/s. A car with a mass of 2000 kg is traveling south on the same
highway at a speed of 30 m/s. Which vehicle has more kinetic energy?
kg p m

s
2
kg p m
2

s
2
360 kg p m
2

2 s
2
9 m
2

s
2
1

2
1

2
Page 4 of 8

The potential energy and kinetic energy in a system or
process may vary, but the total energy remains unchanged.
Conserving Mechanical Energy
At the top of the ramp, the
skater’s mechanical energy is
equal to her potential energy
because she has no velocity.
Fabiola da Silva is a professional
in-line skater who was born in Brazil
but now lives in California.
As the skater goes down the
ramp, she loses height but gains
speed. The potential energy
she loses is equal to the kinetic
energy she gains.
As the skater speeds along the
bottom of the ramp, all of the
potential energy has changed to
kinetic energy. Her mechanical
energy remains unchanged.
100%
PE
50%
PE
100%
KE
50%
KE
Top of Ramp
1
Halfway Down Ramp
2
Bottom of Ramp
3
How do the skater’s kinetic and potential energy change as she skates
up and down the ramp? (Assume she won’t lose any energy to friction.)
Chapter 13: Work and Energy 431
Page 7 of 8 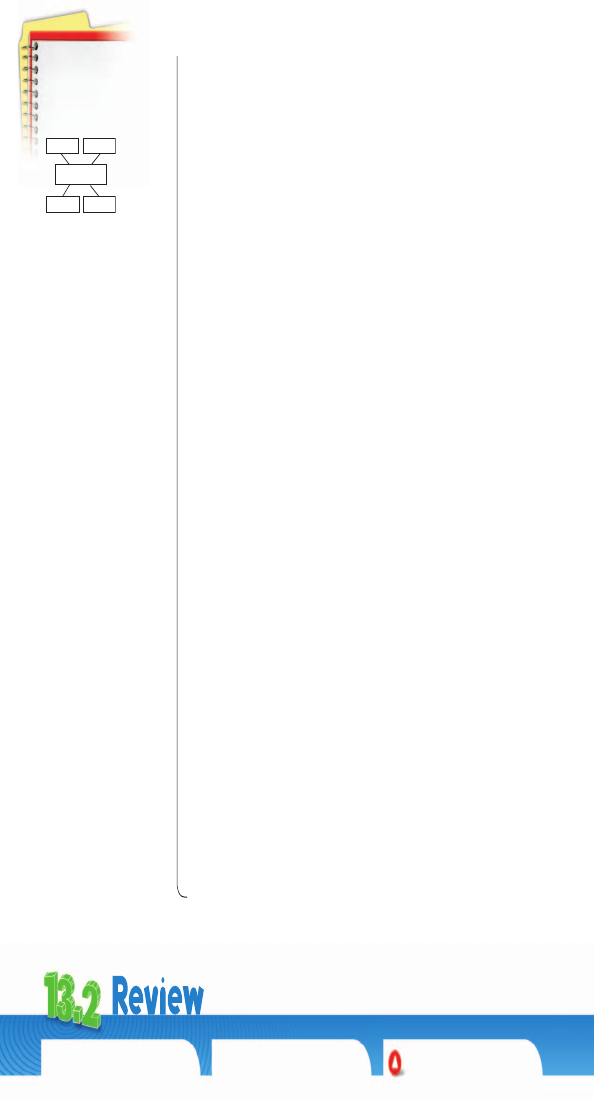 432 Unit 3: Motion and Forces
KEY CONCEPTS
1. Explain the relationship
between work and energy.
2. How are potential energy and
kinetic energy related to
mechanical energy?
3. When one form of energy
changes into one or more
other forms of energy, what
happens to the total amount
of energy?
CRITICAL THINKING
4. Infer Debra used 250 J of
energy to roll a bowling ball.
When the ball arrived at the
end of the lane, it had only
200 J of energy. What hap-
pened to the other 50 J?
5. Calculate A satellite falling to
Earth has a kinetic energy of
182.2 billion J and a potential
energy of 1.6 billion J. What is
its mechanical energy?
CHALLENGE
6. Apply At what point in its
motion is the kinetic energy
of the end of a pendulum
greatest? At what point is its
potential energy greatest?
When its kinetic energy is half
its greatest value, how much
potential energy did it gain?
Forms of Energy
As you have seen, mechanical energy is a combination of kinetic
energy and potential energy. Other common forms of energy are
discussed below. Each of these forms of energy is also a combination
of kinetic energy and potential energy. Chemical energy, for example,
is potential energy when it is stored in bonds.
Thermal energy is the energy an object has due to the motion of its
molecules. The faster the molecules in an object move, the more
thermal energy the object has.
Chemical energy is the energy stored in chemical bonds that hold
chemical compounds together. If a molecule’s bonds are broken or
rearranged, energy is released or absorbed. Chemical energy is used to
light up fireworks displays. It is also stored in food and in matches.
Nuclear energy is the potential energy stored in the nucleus of an
atom. In a nuclear reaction, a tiny portion of an atom’s mass is turned
into energy. The source of the Sun’s energy is nuclear energy. Nuclear
energy can be used to run power plants that provide electricity.
Electromagnetic energy is the energy associated with electrical
and magnetic interactions. Energy that is transferred by electric
charges or current is often called electrical energy. Another type of
electromagnetic energy is radiant energy, the energy carried by light,
infrared waves, and x-rays.
It is possible to transfer, or convert, one energy form into one or more
other forms. For example, when you rub your hands together on a
cold day, you convert mechanical energy to thermal energy. Your body
converts chemical energy stored in food to thermal and mechanical
energy (muscle movement).
MAIN IDEA WEB
Include common forms of
energy in your web.
Page 8 of 8