Use Fill to complete blank online EL CAMINO COMMUNITY COLLEGE DISTRICT pdf forms for free. Once completed you can sign your fillable form or send for signing. All forms are printable and downloadable.

VETERANS INFORMATION BULLETIN
Responsibilities of a Veteran or Other Qualified Recipient
1. To attend class.
2. Understand that benefits may terminate due to Unsatisfactory Progress.
3. When you stop attending a course, you must notify the Certifying Official of your last day of
attendance.
4. Understand that if you do not notify the Certifying Official that you stopped attending a class, the
first day eligible for a “W” will be used as the reporting date to the U.S. Department of Veterans
Affairs (VA).
5. Report to the campus Certifying Official when you receive an “F” if the “F” was earned or because
you stopped attending class. If you stopped attending class, you must report the last day of
attendance to the Certifying Official.
6. Obtain academic counseling if placed on academic or progress probation.
Loss of Veteran Certification Due to Dismissal or Excessive Probation
A Veteran shall be subject to the loss of certification and the cessation of future funds from the U.S.
Department of Veterans Affairs if the veteran’s cumulative academic work falls into one of the following
categories:
a) The veteran has been academically dismissed.
b) The veteran has had more than 50% of units attempted with a “W,” “I,” NC,” or “No Pass” for
three consecutive semesters.
c) The veteran has been on academic probation (below a 2.00 cumulative GPA) for three
consecutive semesters.
Veterans who are in the (a) or (b) categories will be subject to dismissal as well as loss of certification.
Veterans who are in the (c) category will lose certification and eligibility for the continuation of VA
education benefits but will not be subject to dismissal (if the cumulative GPA remains below 2.00 in all
graded credit units attempted but the student achieved a 2.00 or higher during the most recent semester (Fall,
Spring, not Summer or Winter).
Appeal Process
Veterans wishing to appeal an academic or progress dismissal will be subject to the same appeal procedure
as all other students.
Veterans wishing to appeal a loss of certification (loss of benefits) must file an appeal with the Veterans
Office within 15 business days of notification of loss of certification. The appeal will be considered in a non-
arbitrary manner for mitigating or extenuating circumstances. The burden to document the appeal is on the
Veteran. The appeal will be adjudicated by a panel composed of 1) the School Certifying Official, 2) either
the Assistant Director of Veterans Services or Dean of Support Services and 3) the Dean of Counseling or
his/her designee. The decision of the Appeals Panel is final. 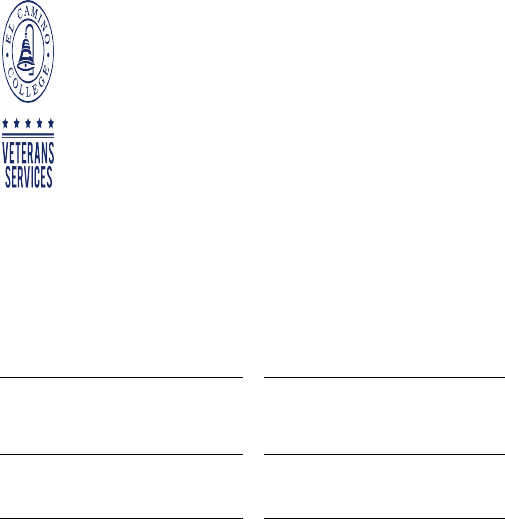 VETERANS INFORMATION BULLETIN
Proof of Issue
I have received a copy of the El Camino College Veterans Information Bulletin, which contain the rules,
regulations, degree or certificate completion requirements, and the costs and relevant fees for the program in
which I have enrolled.
Print Name (Veteran or Eligible Person) Provided by (Print Name College Representative)
Signature (Veterans or Eligible Person) Signature (College Representative)
Date Date
click to sign
signature
click to edit
click to sign
signature
click to edit