Use Fill to complete blank online U.S. DEPARTMENT OF VETERANS AFFAIRS pdf forms for free. Once completed you can sign your fillable form or send for signing. All forms are printable and downloadable.

On average this form takes 136 minutes to complete 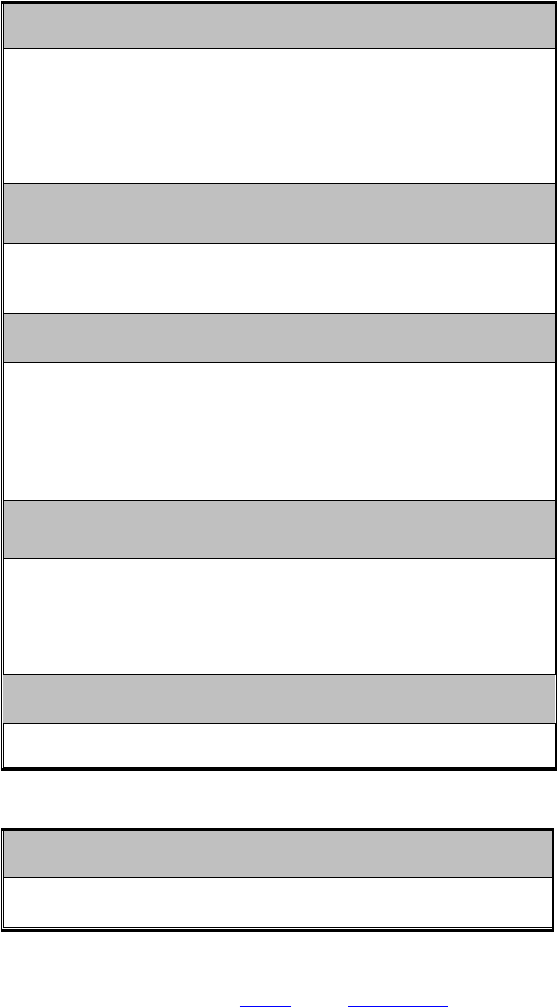 Page 6
REMOVAL OF A CHILD FROM A BENEFICIARY'S AWARD:
Married Child
A person must be unmarried to qualify as a child for VA purposes. Therefore, a person of any age who marries ceases to be a child for
VA purposes.
Note: If a child marries, and then the marriage is terminated by annulment or declared void, VA may resume the payment of additional
benefits for the child.
Child Who Is Between the Ages of 18 and 23 and Not Attending School
To be considered a school child for VA purposes a person must be between the ages of 18 and 23 and attending a VA-accredited
educational facility.
Stepchild
VA must remove a stepchild from a veteran's award when the stepchild ceases being a member of the veteran's household.
Note: The awarding of legal custody of a stepchild to someone other than the veteran will not affect the additional benefits to which the
veteran is entitled for that child, as long as the stepchild remains a member of the veteran's household.
Child Given Up for Adoption
In most cases, a beneficiary who gives up a child for adoption is no longer entitled to additional benefits for that child.
VA will use the most beneficial effective date when removing the veteran's child that has been given up for adoption. The date (month,
day, and year) that the child was given up for adoption must be provided. Use Section IX, Item 25, Remarks to provide this information.
Death of a Child
VA must remove a child from a beneficiary's award when the child dies.
REMOVAL OF A DEPENDENT PARENT DUE TO DEATH:
Dependent Parent
VA must remove a dependent parent from a veteran's award when a parent dies.
For more information on VA benefits, visit our web site at www.va.gov, contact us at https://iris.custhelp.com/, or call us toll-free at
1-800-827-1000. If you use a Telecommunications Device for the Deaf (TDD), the Federal relay number is 711.
VA FORM 21-686c, SEP 2018

APPLICATION REQUEST TO ADD AND/OR
REMOVE DEPENDENTS
INSTRUCTIONS: Make sure you sign and date this form in Items 26A and 26B.
Note: Unless the claimant is the veteran's surviving spouse or a designated "alternate
signer", the veteran must sign in Item 26A. When you have completed this form,
you can mail or fax it to the address or the fax number shown at the bottom of Page 2.
If you prefer you may complete and submit the form online at www.va.gov.
VA FORM
SEP 2018
21-686c
OMB Approved No. 2900-0043
Respondent Burden: 30 minutes
Expiration Date: 09/30/2021
VA DATE STAMP
(DO NOT WRITE
IN THIS SPACE)
SECTION I: VETERAN/CLAIMANT'S IDENTIFICATION INFORMATION
(Note: Completion of this section is REQUIRED to process your request; any omission may delay processing)
NOTE: You may complete the form online or by hand. If completed by hand, print the information requested in ink, neatly and legibly to help expedite processing of the form.
4. VETERAN'S DATE OF BIRTH (MM-DD-YYYY)
3. VA FILE NUMBER (If known)
2. VETERAN'S SOCIAL SECURITY NUMBER
1. VETERAN'S NAME (First, Middle Initial, Last)
ZIP Code/Postal Code
Country
State/Province
City
Apt./Unit Number
No. &
Street
10. COMPLETE MAILING ADDRESS OF VETERAN/CLAIMANT
(Number and Street or Rural Route, P. O. Box, City, State, ZIP Code and Country)
SECTION II: INFORMATION NEEDED TO ADD SPOUSE
11A. SPOUSE'S NAME (First, Middle Initial, Last)
5. CLAIMANT'S NAME (If other than veteran) (First, Middle Initial, Last)
6. CLAIMANT'S SOCIAL SECURITY NUMBER
7. VETERAN'S SERVICE NUMBER (If applicable)
8. TELEPHONE NUMBER (Include Area Code)
9. E-MAIL ADDRESS (Optional)
11B. SPOUSE'S DATE OF BIRTH
11C. SPOUSE'S SOCIAL SECURITY NUMBER (SSN) (If
your spouse does not have an SSN, explain why in Section
IX, Item 25, Remarks)
11D. DATE OF MARRIAGE
11E. PLACE OF MARRIAGE (City and State, County and State, or City and Country)
OTHER (Explain)
TRIBAL
PROXY
COMMON LAW
RELIGIOUS CEREMONY (i.e. Minister, Priest, Rabbi, etc.) or CIVIL CEREMONY (i.e. Justice of the Peace)
11F. HOW WERE YOU MARRIED? (Check one)
NO
YES (If "YES," complete Items 12B and 12C)
12A. IS YOUR SPOUSE ALSO A VETERAN?
12B. SPOUSE'S VA FILE NUMBER (If applicable)
12C. SPOUSE'S SERVICE NUMBER (If applicable)
SUPERSEDES VA FORM 21-686c, JUN 2017.
Page 7
NO (If "NO," complete Items 13B and 13C)
YES
13A. DO YOU LIVE TOGETHER?
13B. REASON FOR SEPARATION (For example, marital problems, job requirements, health, etc.)
13C. CURRENT MAILING ADDRESS OF SPOUSE (Number and Street or Rural Route, P.O. Box, City, State, ZIP Code and Country)
No. &
Street
ZIP Code/Postal Code
Country
State/Province
City
Apt./Unit Number
NOTE: If you are a veteran that VA is paying additional benefits for a stepchild and you no longer live with the stepchild's biological or adoptive parent, complete Section V.
Country
State/Province
City or County

VA FORM 21-686c, SEP 2018
VETERAN'S SOCIAL SECURITY NO.
Page 14
SECTION IX: REMARKS
IMPORTANT: The primary purpose of this form is to gather information or statements that may result in a change to your VA benefits. By
signing this form you have given permission to make benefit payment changes that could result in the creation of an overpayment. If such
adverse actions are taken you will receive additional notification from VA regarding repayment options.
I HEREBY CERTIFY THAT the information I have given above is true and correct to the best of my knowledge and belief.
26A. SIGNATURE OF BENEFICIARY/CLAIMANT OR ALTERNATE
SIGNER* (Please sign in ink)
26B. DATE (MM/DD/YYYY)
*ALTERNATE SIGNER: By signing on behalf of the beneficiary/claimant, I certify that the claimant is:
• under the age of 18,
• mentally incompetent to provide substantially accurate information needed to complete the form or to certify that the statements made on the
form are true and complete, or
• physically unable to sign the form
• a court-appointed representative,
• an attorney in fact or agent authorized to act on behalf of the claimant under a durable power of attorney,
• a person who is responsible for the care of the claimant, to include but not limited to a spouse or other relative, or
• a manager or principal officer acting on behalf of an institution which is responsible for the care of the claimant.
PRIVACY ACT INFORMATION: VA will not disclose information collected on this form to any source other than what has been authorized under the Privacy Act of 1974 or Title
38, Code of Federal Regulations 1.576 for routine uses (i.e., civil or criminal law enforcement, congressional communications, epidemiological or research studies, the collection
of money owed to the United States, litigation in which the United States is a party or has an interest, the administration of VA programs and delivery of VA benefits, verification
of identity and status, and personnel administration) as identified in the VA system of records, 58VA21/22/28, Compensation, Pension, Education, and Vocational Rehabilitation
and Employment Records - VA, published in the Federal Register. Your obligation to respond is required to obtain or retain benefits. Giving us your and your dependents' SSN
account information is mandatory. Applicants are required to provide their SSN and the SSN of any dependents for whom benefits are claimed under Title 38 USC 5101 (c)(1).
The VA will not deny an individual benefits for refusing to provide his or her SSN unless the disclosure of the SSN is required by Federal Statute of law in effect prior to January
1, 1975, and still in effect. Information that you furnish may be utilized in computer matching programs with other Federal or state agencies for the purpose of determining your
eligibility to receive VA benefits, as well as to collect any amount owed to the United States by virtue of your participation in any benefit program administered by the Department
of Veterans Affairs.
PENALTY: The law provides severe penalties which include fine or imprisonment, or both, for the willful submission of any statement or evidence of a material fact, knowing it
to be false, or for the fraudulent acceptance of any payment to which you are not entitled.
RESPONDENT BURDEN: We need this information to determine marital status and eligibility for an additional allowance for dependents under 38 U.S.C. 1115. Title 38, United
States Code, allows us to ask for this information. We estimate that you will need an average of 30 minutes to review the instructions, find the information and complete this
form. VA cannot conduct or sponsor a collection of information unless a valid OMB control number is displayed. You are not required to respond to a collection of information if
this number is not displayed. Valid OMB control numbers can be located on the OMB Internet Page at www.reginfo.gov/public/do/PRAMain. If desired, you can call
1-800-827-1000 to get information on where to send comments or suggestions about this form.
25. REMARKS (If any)
*ALTERNATE SIGNER: By signing on behalf of the beneficiary/claimant, I certify that I am:
SECTION X: BENEFICIARY/CLAIMANT'S CERTIFICATION AND SIGNATURE
(Note: Completion of this section is REQUIRED to process your request)
(FOR USE BY VA ONLY)