Use Fill to complete blank online TOWN OF JACKSON, WYOMING (WY) pdf forms for free. Once completed you can sign your fillable form or send for signing. All forms are printable and downloadable.

April 10, 2020
Tyler Valentine
Town of Jackson Planning and Building Department
Post Office Box 1687
Jackson, Wyoming 83001
RE: MAN-MADE SLOPE ANALYSIS - IN SUPPORT OF ZCV APPLICATION, THE BLUFFS, 984 BUDGE DRIVE
Dear Tyler,
The proposed development is located at 984 Budge Drive in Jackson, Wyoming (the “Property”). As currently
proposed, the buildable areas of the Property contain slopes which exceed 25%. However, this property has been
graded significantly prior to any grading regulation or permitting requirements. The Teton County Geographic
Information System (TCGIS) shows aerial photos indicating significant grading occurred on the south slope of East
Gros Ventre Butte in order to develop the various residential properties along Budge Drive. Major earthwork in
this area, according to aerial photography, appears to have occurred well prior to the 1994 Town of Jackson Land
Development Regulations (ToJLDRs).
METHODOLOGY
Historical aerial photography from the TCGIS was reviewed to establish a timeline for grading and disturbance in
this area. The attached figures include pertinent, annotated aerial photos to illustrate this methodology.
It appears the majority of grading performed at 984 Budge Drive occurred between 1955 and 1967, most likely in
the mid-1960s. The attached Figures 1 & 2 show pre- and post-construction images taken in 1955 and 1967,
respectively. These improvements were made in the same era of the original Budge Drive construction and in
association with development of the properties at 986 and 988 Budge Drive. The style of grading at the time and
in the area (also performed on the Clark’s Redi-mix property to the west) was a cut/fill approach where native
material was cut from the hillside and placed downhill, thus creating a relatively level bench on which to develop
residential and commercial structures. Aerial photography and site observations support this conclusion.
The approximate extent of the cut and fill relevant to this project has been estimated and shown on the TCGIS
aerial image from 1977. Existing grade on the project site is nominally the same as it appears in 1977. One
exception to this is additional grading which was performed between 2003 and 2005. Two modular structures
were placed in the northwest portion of the property and grading into the hillside was performed to increase the
flat platform surrounding the buildings. Cut material appears to have been placed downhill of these structures.
The attached Figure 4 shows the 2005 TCGIS aerial photo, and the cut/fill areas are annotated.
No grading or earthwork is evident between 2005 (Figure 4) and 2015 (Figure 5). Additional grading was performed
on the property during the response to the West Broadway Landslide by the Town of Jackson when the current
owner donated an easement to the Town to support an alternate vehicle access and a waterline. The one-lane
road is constructed using geogrid reinforced aggregate fill and supported above and below by precast concrete
blocks. 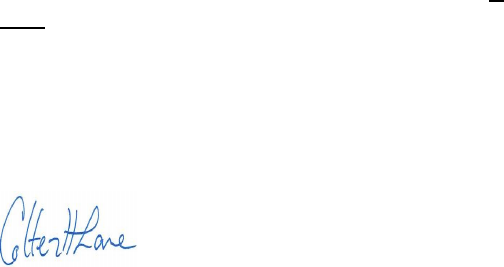 Jorgensen Geotechnical, LLC April 10, 2020
984 Budge Drive ZCV Application: Manmade Slope Analysis
2
Cuts and fills in the proposed Lots 1-4 are well-supported by aerial photographic evidence. Grading on Lot 5
required additional verification from site reconnaissance, and photos from a site visit in May 2017 are included as
attachments to this letter. Annotations are included to show Jorgensen’s interpretation of cut and fill areas.
CONCLUSIONS
According the current ToJLDRs Division 5.4.1.B.1, “Physical development on manmade slopes is permitted,
provided that the proposed finish grade complies with all other applicable standards of these LDRs.” Based on
the information described above, the slopes on the Property proposed for development which exceed 25% are
manmade. Therefore, development of said slopes is allowed per Division 5.4.1.B.1.
If you have any questions regarding this letter, please don’t hesitate to contact us.
Sincerely,
JORGENSEN GEOTECHNICAL, LLC
Colter H. Lane, P.E.
Geotechnical Engineering Manager
Attached: Figures 1-6: Aerial Photos from Teton County GIS MapServer
Photos 1-2: Site Observation Photos (Lot 5), dated May 2017
ZCV Exhibit

Photo 1 – Photo taken facing NNW near the NW corner of the subject property. Grading that appears to have been performed between
2003 and 2005 is indicated. Photo dated May 2017, C Lane.
Approximate crest of additional
grading performed 2005

Photo 2 – Photo taken facing south. Road constructed by the TOJ is visible in the upper portion of the photo. The estimated toe of the fill
placed during grading of the site is shown. Photo dated May 2017, C Lane.
Approximate toe of fill placed
prior to 1967
TOJ access road 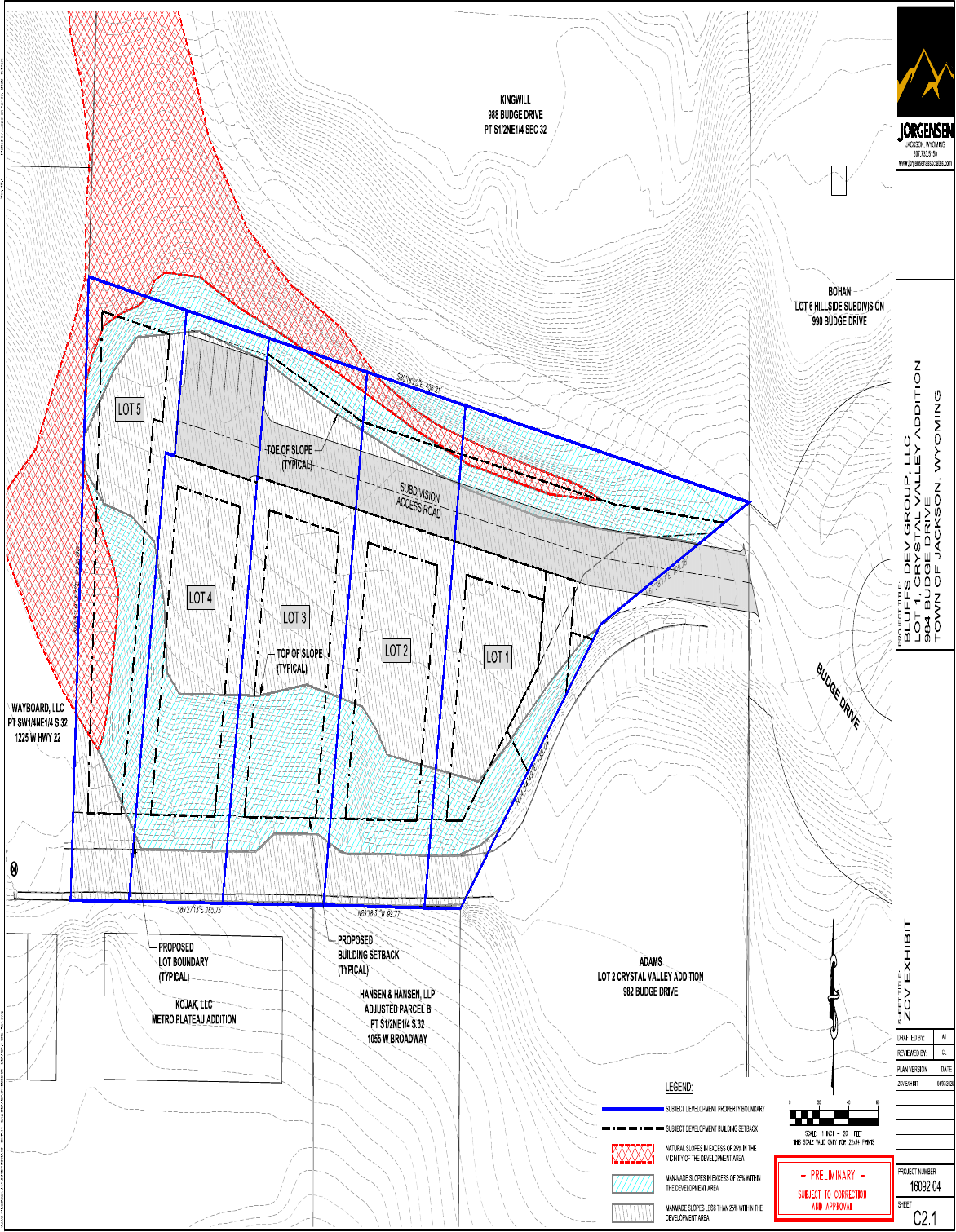