The Request LOP Request for Letter of Permission form is 4 pages long and contains:

:
Request for Letter of Permission
$50.00 fee is required at the time of submission.
Last name: First name:
Student ID #: Program
Home address: Street: City:
Province: Postal code: Telephone number:
Final credit(s)? Yes No
Name of host institution:
Address of host institution:
Have yo
u registered at the above institution previously? Yes No
Start date of course(s) (Y/M/D): Finish date:
Host
course #
Host
course title
U of G course
number(s)
Office Use Only
Credit weight
Office Use
Only
Department approval
Office Use Only
I have read and understood the Letter of Permission Conditions that accompany this form, and I understand that a Letter
of Permission does not guarantee admission to another institution.
Student’s signature: Dat
e:
For Office Use Only:
Program Counsellor / Director: I approve the proposed course(s) outlined above.
Ext.: Signature: Date:
Comments:
Fee received: Receipt #: 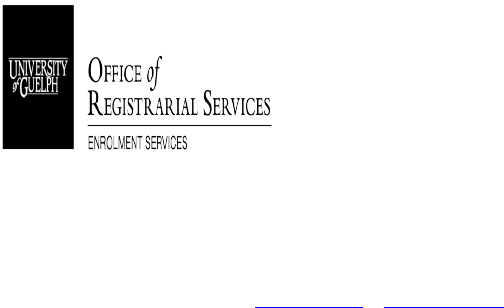 Letter of Permission
Credit Card Payment Form
Page 1
The Letter of Permission processing fee is $50.00 per institution.
Please fax this form to Enrolment Services at 519-763-6809 or submit it in person to Enrolment Services, University Centre
Level 3.
NOTE: this form cannot be processed if received as an email attachment.
Student Information:
Last name: First name:
Student ID #:
Name(s) of institution(s) attending on LOP:
Term(s) attending:
Student’s signature (REQUIRED):
Credit Card Payment Information:
You must provide the credit card holder’s signature on page 1 and the additional credit card information on page 2.
Note that the payment will not be processed until the approved Request for Letter of Permission form(s) is received.
Payment signature (Visa or Mastercard card holder’s signature REQUIRED):
For Office Use Only:
Total: $ Receipt #:
Date: Initials: 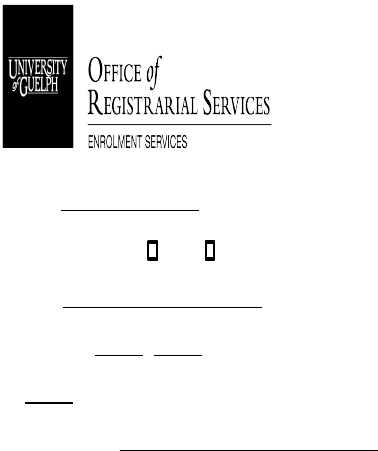