Use Fill to complete blank online UNIVERSITY OF PITTSBURGH MEDICAL CENTER pdf forms for free. Once completed you can sign your fillable form or send for signing. All forms are printable and downloadable.

The RELEASE FROM LIABILITY FOR FAILURE TO ADMINISTER BLOOD (University of Pittsburgh Medical Center) form is 4 pages long and contains: 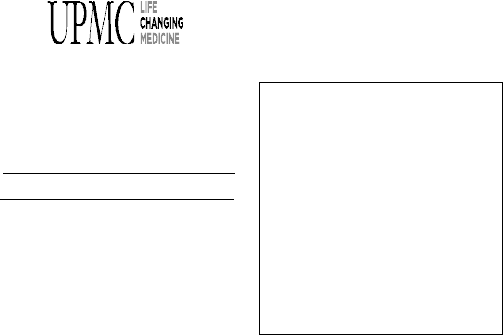 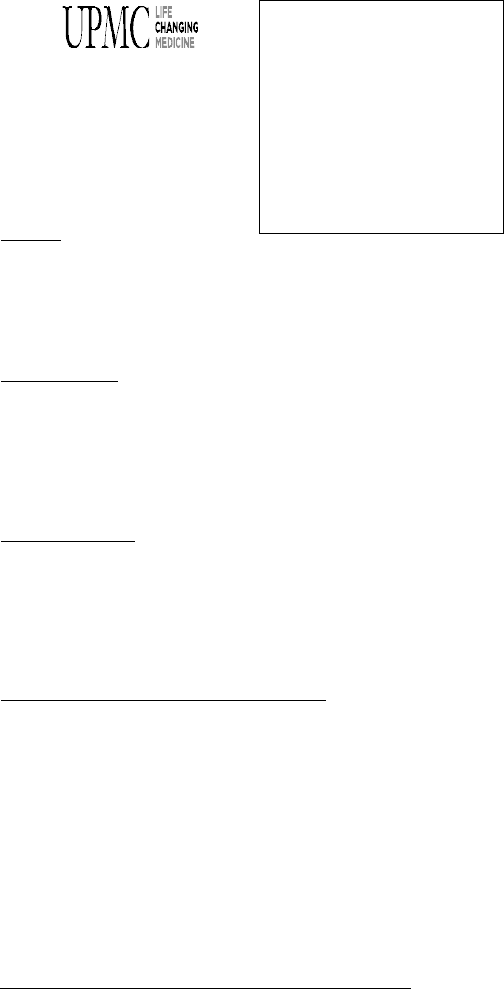 Page 4 of 4
*2CNTT* 2CNTT 08/19/2019
Glossary of Terms: Personal Choice of Blood Products and Procedures
Whole B
lood- Whole blood is made up of four main components: Plasma (FFP), Red Blood Cells, White
Blood Cells, and Platelets. Blood carries oxygen and nutrients to the lungs and body tissues.
Albumin- Albumin is a protein made by the liver and flows in the plasma. Albumin is sometimes used to
replace liquid when bleeding occurs, as in severe injuries or burns.
Immune Globulins- Immune Globulins, also called antibodies, are proteins that flow in the plasma. These
proteins are important because they fight viruses and bacteria in the body. Sometimes these antibodies are used
in medicines that fight disease, examples of immune globulins are, IgG, IgA, IgM.
Clotting Factors- Clotting factors are proteins that flow in the plasma and help blood to make clots that stop
bleeding. Some patients who tend to bleed more easily are given special clotting factors.
Examples of Clotting Factors: Cryoprecipitate, Fibrinogen.
Apheresis- Apheresis is a treatment for certain diseases when a patient’s antibodies are attacking his or her
own immune system. A machine removes the bad plasma and replaces it with a good plasma substitute.
Also called: Plasma exchange, plasmapheresis
Question to Ask Your Doctor: Can albumin be used as the substitute?
Auto-Transfusion- Blood is drawn from the surgical site into a continuous flow system and is then washed and
filtered and returned into the patient.
Other names: Cell Saver, Cell Salvage, Salvaged autologous blood
Dialysis- Dialysis uses a machine to act as an organ. Blood flows through the machine in a closed system and
filters and cleans it before returning it to the patient.
Other names: renal dialysis, hemodialysis
Epidural Blood Patch- An epidural blood patch stops spinal fluid leakage. A small amount of a patient’s own
blood is injected into the tissue around the spinal cord. The clotting factors in the blood will help to seal the
leak.
Eryth
ropoietin- Erythropoietin is an injected medicine to help a patient’s own bone marrow produce more red
blood cells. Some brands of erythropoietin contain small amounts of albumin. Other names: recombinant
erythropoietin, EPO, hematopoietin, erythropoietin-stimulating agent, ESA.
Hear
t and Lung Machine- The heart and lung machine keeps the patient’s blood moving during certain
surgeries. Blood is directed into a machine where it picks up oxygen and is sent back into the patient. The flow
of blood is in a closed system and is primed with a non-blood fluid.
Hemod
ilution- Hemodilution is a process that helps to reduce blood loss during surgery. The patient’s blood is
collected into a closed system bag and is replaced with a non-blood fluid. After surgery, the patient’s own blood
is returned to his or her body.
Plat
elet Gel- Platelet gel is made from a patient’s own blood and is used to seal wounds and lessen bleeding. A
small amount of blood is collected and spun down to remove the platelets and white cells. This concentrate of
platelets and white cells is then put on surgical sites to stop bleeding.
Also called: Autologous Platelet Gel or Platelet Rich Plasma.
Facility: ______________________________