Use Fill to complete blank online AUSTRALIAN CORRESPONDENCE SCHOOLS pdf forms for free. Once completed you can sign your fillable form or send for signing. All forms are printable and downloadable.

STAFF-IN-CONFIDENCE (WHEN COMPLETED)
NATIONAL POLICE CHECKING SERVICE (NPCS)
APPLICATION/CONSENT FORM
(ACCREDITED ORGANISATION - CUSTOMERS)
SECTION 2: PROOF OF IDENTITY
When applying for a national police history check it is necessary for you to verify your identity in line with Australia’s National Identity Security Strategy.
To achieve this, you must at a minimum:
provide four (4) documents
all four (4) documents cannot be drawn from a single category
it is strongly recommended to try and use a document from each category
In combination, your documents must include your full name, date of birth, and a photograph
Commencement of identity documents
(a) full Australian birth certificate (not an extract or birth card)
(b) current Australian passport (not expired)
(c) Australian visa current at time of entry to Australia as a resident or tourist
(d) ImmiCard issued by Department of Home Affairs (previously the Department of Immigration and Border Protection) that enables the cardholder to prove their
visa and/or migration status and enroll in services
(e) certificate of identity issued by Department of Foreign Affairs and Trade (DFAT) to refugees and non-Australian citizens for entry to Australia
(f) document of identity issued by DFAT to Australian citizens or persons who have the nationality of a Commonwealth country for travel purposes
(g) certificate of evidence of resident status.
Primary use in the community documents
(a) current Australian drivers licence, learner permit or provisional licence issued by a state or territory, showing a signature and/or photo and the same name as
claimed
(b) Australian marriage certificate issued by a state or territory (church or celebrant-issued certificates are not accepted)
(c) current passport issued by a country other than Australia with a valid entry stamp or visa
(d) current proof of age or photo identity card issued by an Australian Government agency in the name of the applicant, with a signature and photo
(e) current shooters or firearms licence showing a signature and photo (not minor or junior permit or licence)
(f) for persons under 18 years of age with no other Primary Use in Community Documents, a current student identification card with a signature or photo.
Secondary use in the community documents
(a) certificate of identity issued by DFAT
(b) document of identity issued by DFAT
(c) convention travel document secondary (United Nations) issued by DFAT
(d) foreign government issued documents (for example, drivers licence)
(e) Medicare card
(f) enrolment with the Australian Electoral Commission
(g) security guard or crowd control photo licence
(h) evidence of right to an Australian government benefit (Centrelink or Veterans’ Affairs)
(i) consular photo identity card issued by DFAT
(j) photo identity card issued to an officer by a police force
(k) photo identity card issued by the Australian Defence Force
(l) photo identity card issued by the Australian Government or a state or territory government
(m) Aviation Security Identification Card
(n) Maritime Security Identification card
(o) credit reference check
(q) Australian secondary student photo identity document
(r) certified academic transcript from an Australian university
(s) trusted referees report
(t) bank card
(u) credit card
Please note that it is an Australian Criminal Intelligence Commission (ACIC) requirement of fit2work to link identity documents to you as an individual as a part of the
application process. To do so, it may be necessary to require additional documents to be uploaded as well as make all enquiries necessary to satisfy this
requirement.
fit2work is required, and will report any suspicion of identity fraud detected on the platform to the relevant Australian Police Service and the ACIC.
Applications must be made by the individual for whom the check is sought, or somebody authorised to make the application on the applicant’s behalf (e.g. parent,
legal guardian or authorised agent). The link between identity documents and the applicant must still be satisfied by fit2work.
Applicants are only required to provide identity documents for their primary name, not for any previously known names.
If identity documents are provided using a former name (e.g. maiden name) evidence of the name change must be provided in addition to the minimum four (4)
identity documents.
If you have a legitimate reason prohibiting you from meeting these verification of identity requirements, special provisions can be used to verify your identity.
If this applies to you please go to https://www.fit2work.com.au/Documents/General/IdRequirements.pdf , or click here. 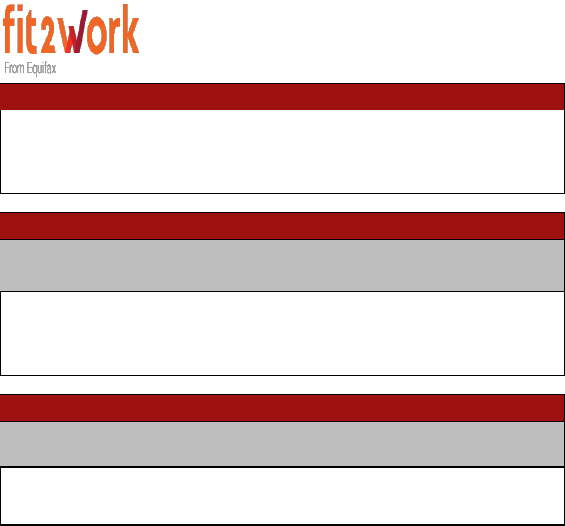