Use Fill to complete blank online NEW JERSEY INSTITUTE OF TECHNOLOGY pdf forms for free. Once completed you can sign your fillable form or send for signing. All forms are printable and downloadable.

On average this form takes 77 minutes to complete

The Location of Study Section A: General Administrative Information (New Jersey Institute of Technology) form is 22 pages long and contains: 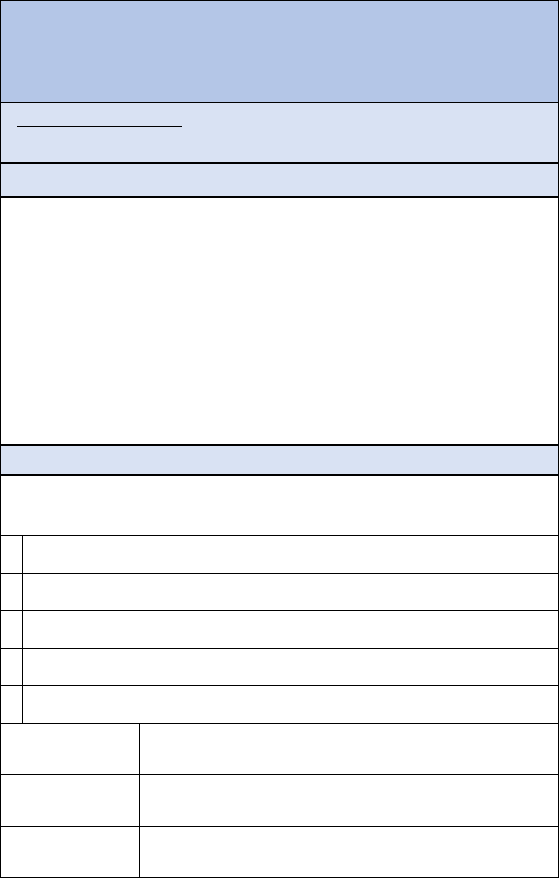 Section C: Exempt Recombinant DNA Experiments
(continued)
(please check those sections of the NIH Guidelines under which your experiments are exempt
Most experiments involving E. coli K-12 host vector systems and Saccharomyces cerevisiae and Saccharomyces
uvarum host vector systems are exempt from the NIH Guidelines. If the answer to all 3 of the following questions
are no, then the experiments are exempt according to Appendix C-II (for E. coli K-12) or Appendix C-III (for
Saccharomyces cerevisiae and Saccharomyces uvarum).
Yes
No
Please check yes or no for the following questions
☐ ☐
Do any experiments involve Risk Groups 3, 4 or restricted organisms or nucleic acids from Risk Groups 3, 4
or restricted organisms?
☐
☐
Do any experiments involve introduction of genes coding for molecules toxic for vertebrates?
☐
☐
Will there be any large-scale experiments (more than 10 liters of culture)?
Please include only information regarding Exempt rDNA experiments in the tables below.
#
Host (s)
Indicate the host(s)
into which the
recombinant material
(rDNA, RNA, virus)
will be introduced.
Examples include: E.
coli, S. cerevisiae,
human/animal cells,
whole animals,
plants.
Species
Subspecies, variety,
serotype, strain.
Vectors
Which host-vector
system will be used
for this research?
Examples include:
bacterial plasmids,
yeast plasmids,
cultured cell plasmid
vectors, baculovirus,
AAV, other viral
vectors
DNA Sequence
List names of genes
or DNA segments
that will be evaluated
Proteins
List proteins
produced if
applicable
#1
#2
#3
#4
#5
#6
Yes
No
Please check yes or no for the following questions
☐
☐
Will an attempt be made to purify any of the foreign gene products encoded by the gene?
☐
☐
Will a virus-derived vector system that is engineered to be replication-incompetent be used?
EHS010 Registration Document For Biohazards
5
September 2016 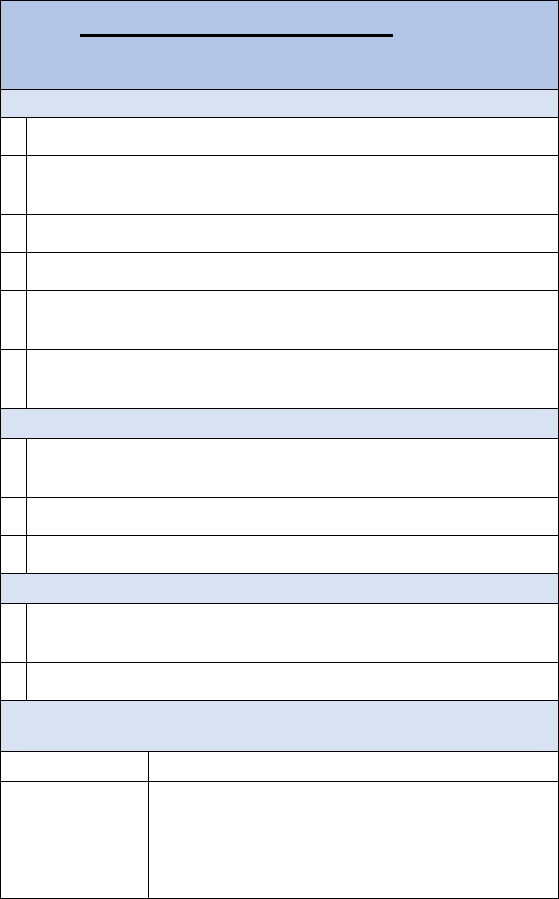 Section D: Non-Exempt Recombinant DNA Experiments (Continued)
Generation and Use of rDNA
Complete this section if you are generating and/or using non-exempt rDNA in your laboratory.
Answer questions 1-8 for EACH host-vector system.
Transgene
1. Describe the gene sequence(s) inserted into the recombinant vector:
a. Source of gene(s) (genus/species):
b. Do any of the gene sequences increase oncogenic potential, originate from an HHS or USDA select agent or toxin,
transfer a drug resistance trait that has the potential to compromise the use of the drug to control disease or have the
potential to increase the pathogenicity or virulence of a vector system?
☐
No
☐
Yes, explain below:
c. Describe the function and activity of the transgene(s):
If you are planning on using an extensive number of transgenes, list classes.
If you are using a genome-wide approach, indicate the components of the constructs in the library or libraries.
2. If any of the above genes are from a viral source, do they compromise more than 2/3 of the viral genome?
☐
No
☐
Yes, specify:
3. Will a deliberate attempt be made to obtain expression of the foreign gene encoded in the recombinant DNA or RNA?
☐
No
☐
Yes
4. Identify vector system – Please check appropriate boxes below and describe host-vector systems:
☐
Bacterial Plasmid
☐
Adeno-Associated Virus
☐
Adenovirus
☐
Simple Retrovirus
☐
Lentivirus
☐
Viruses other than lentivirus, simple retrovirus, adenovirus or adeno-associated virus
Describe:
EHS010 Registration Document For Biohazards
7
September 2016 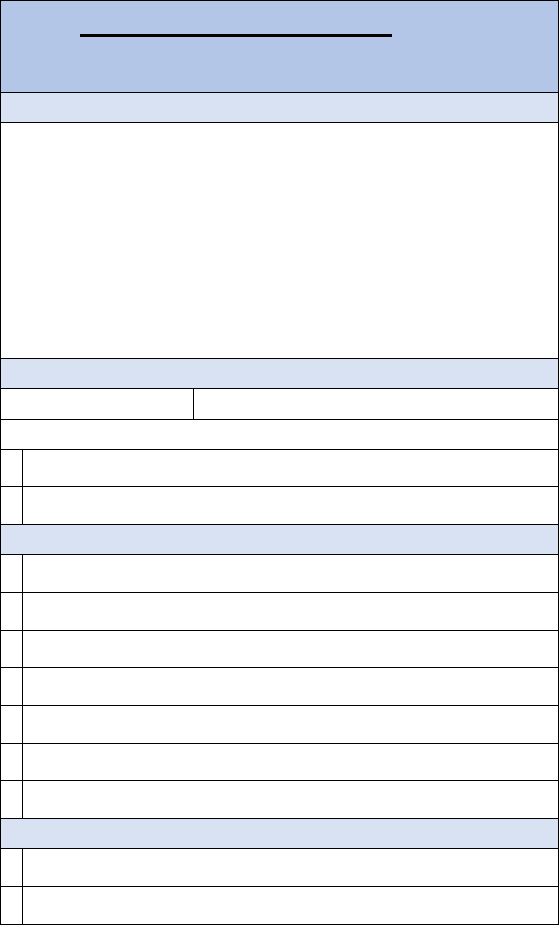 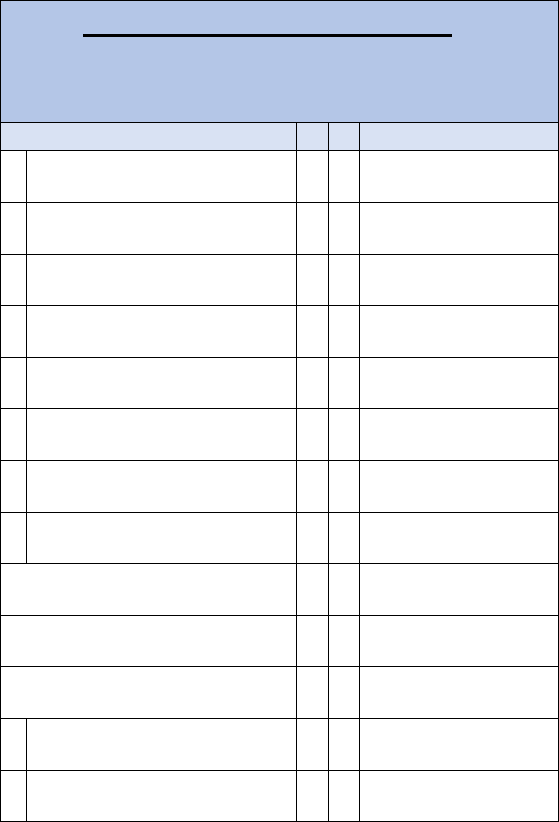 Please fill out a separate section E for each additional potentially infectious agent used in
the lab.
Section E: Research with Potentially Infectious Biological Agents
Complete this section if you are working with an agent that could cause an infection in humans, including opportunistic
infections. Provide the information requested below for each agent.
Please check yes or no for each question
Yes
No
Please Provide Details Below
1.
Name of agent (include genus, species, sub-species, strain,
etc.):
☐ ☐
2. Will antibiotic resistance be expressed?
☐ ☐
3. Will toxin be produced?
☐ ☐
4. Largest volume of agent to be cultured?
☐ ☐
5. Will agent be concentrated?
☐ ☐
6. If agent is to be concentrated, how will it be concentrated?
☐ ☐
7. How frequently will agent be manipulated?
☐ ☐
8. How will agent be inactivated?
☐ ☐
a. heat
☐ ☐
b. chemical
☐ ☐
c. other (list):
☐ ☐
9. Will agent be introduced into animals?
☐ ☐
10.
Have all personnel that will be handling this agent
received appropriate biosafety training?
☐ ☐
EHS010 Registration Document For Biohazards
9
September 2016 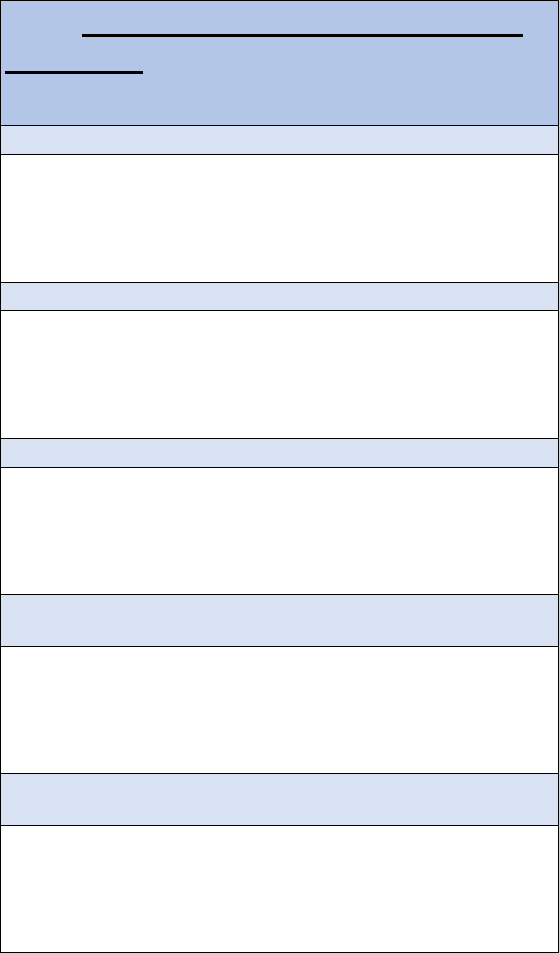 Section F: Human and Non-human Primate Blood, Body Fluids, Cell Lines,
and Tissue Explants
Identify the type and source of the materials to be used:
1. Samples to be manipulated (for human or non-human primate cells lines, indicate if cells are established or primary):
2. Source of samples:
3. If commercially obtained, please list vendor and specific cell lines:
4. Have all personnel who work with human material completed the appropriate Biological Safety/Bloodborne Pathogens
training program (please answer below and complete section J)?
5. Is laboratory equipped with biological safety cabinet or other containment equipment to safely manipulate these materials
(please answer below and complete section J)?
EHS010 Registration Document For Biohazards
10
September 2016 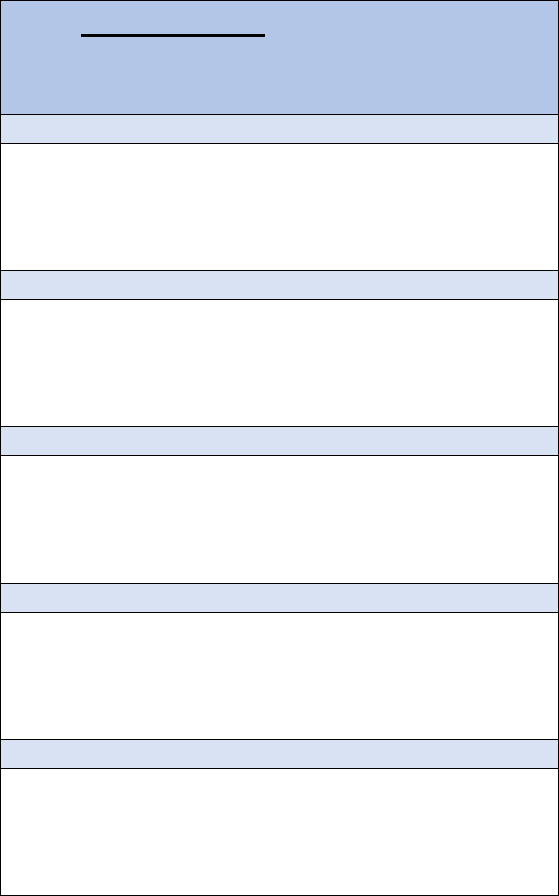 Please fill out a separate section G for each additional toxin used in the lab.
Section G: Toxins of Biological Origin
Complete this section if you are working with a toxin of biological origin. Provide the information requested below for each
toxin.
1. Name of toxin(s):
2. Largest quantity in use and stored:
3. Describe how the toxin is stored:
4. Describe the toxin deactivation and disposal procedures:
5. At what Biosafety Level is this material to be handled:
EHS010 Registration Document For Biohazards
11
September 2016 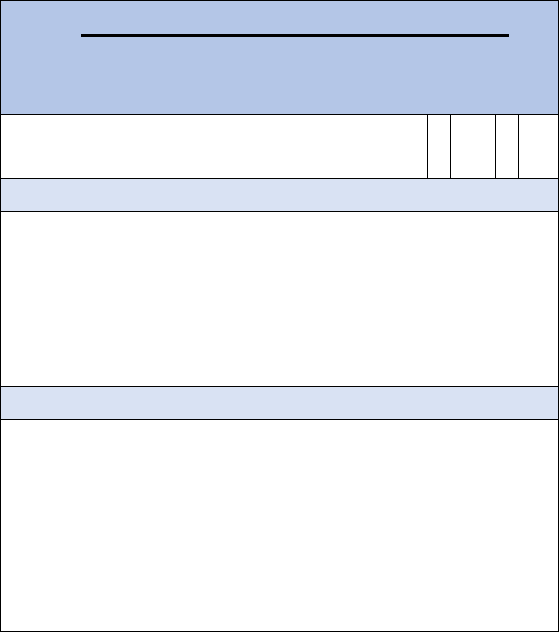 Section H: Transportation/Shipping (includes ‘hand-carrying’ specimens)
If you are involved in shipping hazardous materials and/or dangerous goods please contact the EHS department at
973-596-3059 or at healthandsafety@njit.edu
Will materials be transported outside of the laboratory in which they are being used?
(please check one)
☐
Yes
☐
No
Please describe the nature of the materials to be transported
Describe:
Please describe the proposed method of transport
Describe:
EHS010 Registration Document For Biohazards
12
September 2016 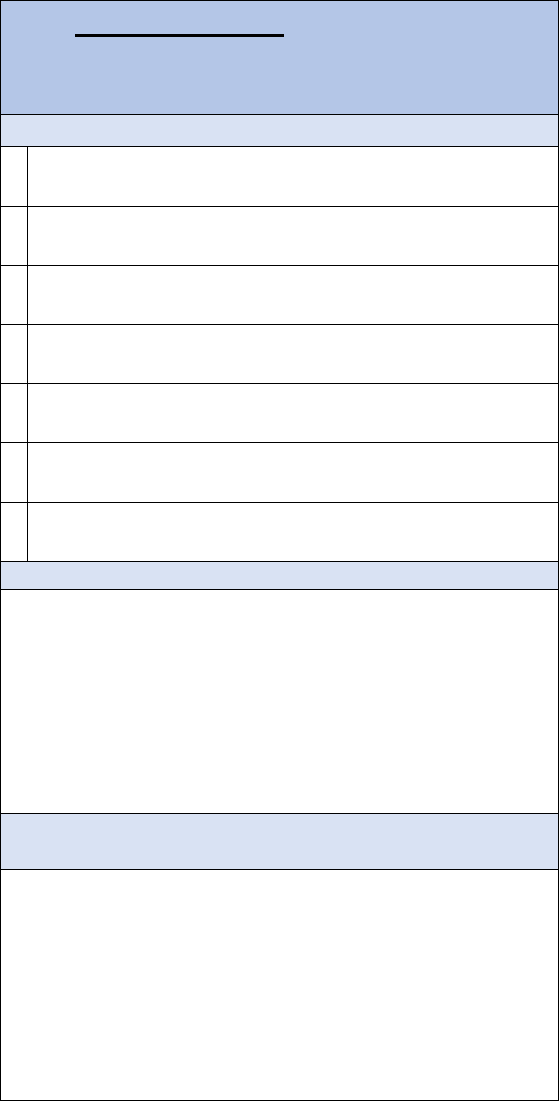 Section I: Dual Use Research of Concern
Complete this section to determine if your research is considered dual use research of concern—research that may be used
for beneficent goals as well as malevolent purposes
1. Please check any categories below that apply to your research
☐
Increase in virulence of the pathogen
☐
Production of a novel toxin
☐
Enhance transmissibility of the pathogen
☐
Alteration of the pathogen’s host range
☐
Interfere, by-pass or diminish the effectiveness of diagnostic tools and therapeutic or prophylactic antimicrobial or
antiviral treatments
☐
Enhance capacity for spreading or for easy release of making them weapons-grade
☐
Not Applicable
2. Please describe how your research fits any of the above category
3. Please identify and address additional risks to employees, the environment and/or public health that this
research could present
EHS010 Registration Document For Biohazards
13
September 2016 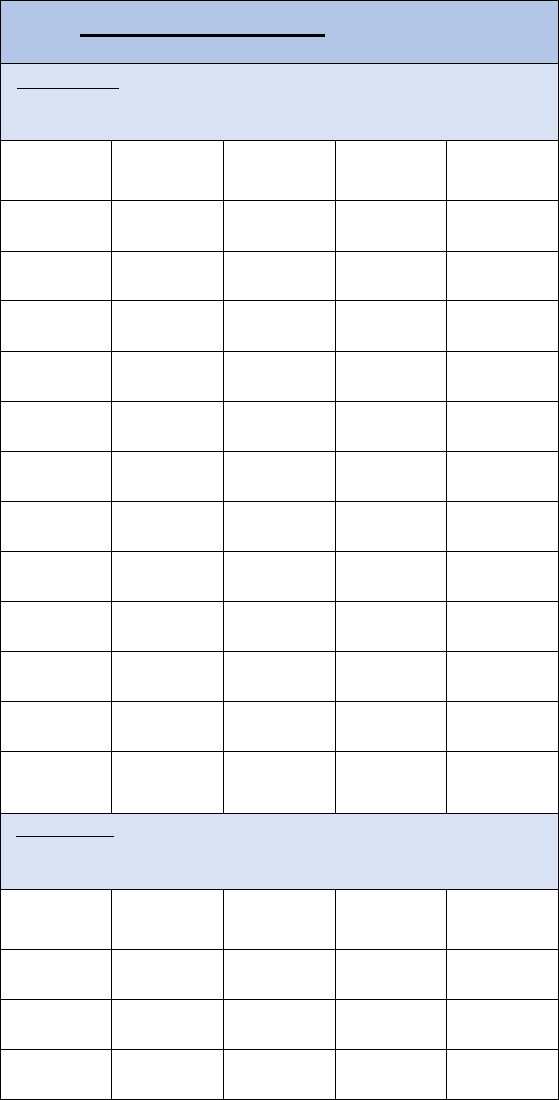 Section J: Protocol Specific Laboratory Safety
1. Personnel and Training
Please list all laboratory personnel involved in this protocol and indicate the dates of the required training. If training has
not yet been scheduled, please indicate pending or TBD.
Name Title
Date of Biosafety
Training
Date of BBP
Training
Other Protocol
Specific Training
2. Laboratory Inspection
Please list date of last laboratory Inspection conducted by the EHS Department. If your lab has not been inspected, please
contact EHS at 973-596-3059 or at healthandsafety@njit.edu
Building Department Room Numbers Date of Inspection
Approved Biosafety
Level
EHS010 Registration Document For Biohazards
14
September 2016 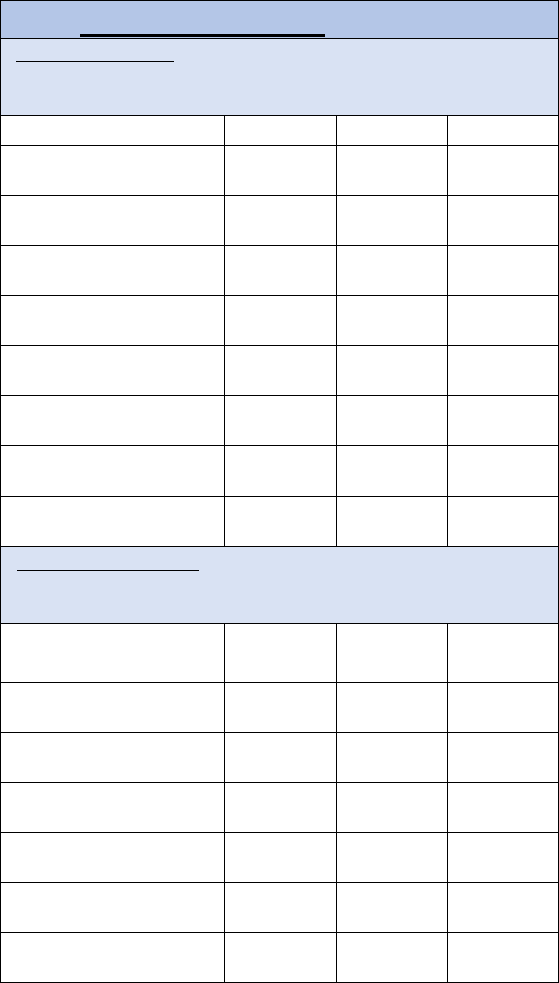 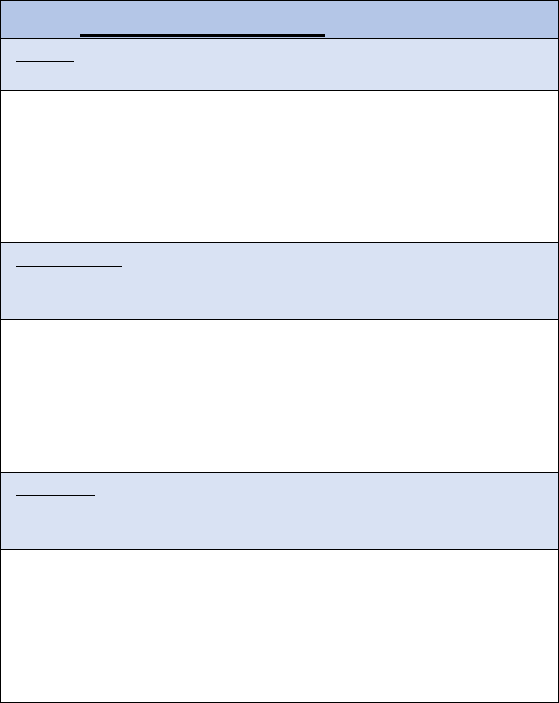 Section J: Protocol Specific Laboratory Safety (Continued)
5. Spill Control
Please describe available laboratory spill control equipment and procedures used for biological spills
6. Waste Decontamination
Please describe how potentially contaminated laboratory waste, both liquid and solid, is decontaminated and subsequently
disposed. Please note location of autoclave if one is available for waste decontamination.
7. Control of Sharps:
Please describe how sharps are handled in the lab. Is an attempt made to limit the use of sharps when working with
potentially infectious materials?
EHS010 Registration Document For Biohazards
16
September 2016