Use Fill to complete blank online WELLINGTON CITY COUNCIL NEW ZEALAND pdf forms for free. Once completed you can sign your fillable form or send for signing. All forms are printable and downloadable.

Use our library of forms to quickly fill and sign your Wellington City Council New Zealand forms online.

Human–Environment
Interaction
Main Ideas
• The Dutch and the Venetians
altered lands to fit their
needs by constructing
polders and canals.
• Uncontrolled logging and
acid rain destroy forests.
Places & Terms
dike terpen
polder Zuider Zee
seaworks Ijsselmeer
Connect to the Issues
pollution
Water pollution
is creating conditions that kill
the fish in Venice’s lagoon.
Making a Polder
Seawater leaves salt in the soil. Rain
gradually washes the salt away.
Windmills once supplied the
power used to pump water from
polder land. Today electric pumps
are used to drain the land.
Earthen dikes
are built around
a shallow area
of water.
In time, the land can be
used to grow many crops—
such as Dutch tulips.
Alfalfa is often the first
crop sown. It has deep
roots, which break up soil;
alfalfa is also used for
livestock feed.
SKILLBUILDER: Interpreting Graphics
HUMAN–ENVIRONMENT INTERACTION Why does it take
time for polder land to be ready for farming?
PLACE How would the process be different if a polder were made
in a place where there is freshwater, not saltwater?
282
The water is gradually
pumped away and
drained off the land.
A HUMAN PERSPECTIVE “1800 DIE IN WIND-WHIPPED FLOOD
WATERS!” February 1, 1953, witnessed a disaster in the Netherlands.
Winds estimated at 110 to 115 miles per hour piled up gigantic waves
that ripped through
dikes—earthen banks—holding back the North Sea.
When the storm was over, 4.5 percent of the Netherlands was flooded,
and thousands of buildings were destroyed. The Netherlands is prone to
floods because much of its land is below sea level.
Polders: Land from the Sea
An old saying declares, “God created the world, but the Dutch created
Holland.” (Holland is another name for the Netherlands.) Because the
Dutch needed more land for their growing population, they reclaimed
land from the sea. At least 40 percent of the Netherlands was once under
the sea. Land that is reclaimed by diking and draining is called a
polder.
Page 1 of 4 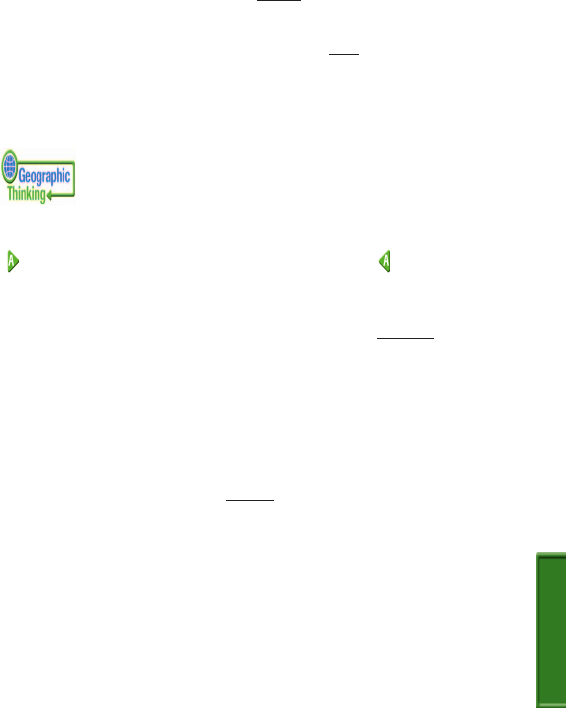 Human–Environment Interaction 283
SEAWORKS The Dutch erected seaworks, structures that are used to
control the sea’s destructive impact on human life. Those seaworks
include dikes and high earthen platforms called
terpen. The dikes hold
back the sea, while the terpen provide places to go for safety during
floods and high tides.
Over the centuries, the Dutch found ways to reinforce the dikes and
to control water in the low-lying areas the dikes protected. In the 1400s,
the Dutch began using their windmills to power pumps that drained
the land. When the French conqueror Napoleon viewed a site with 860
windmills pumping an area dry, he reportedly said, “Without equal.”
Today the pumps use electric motors instead of windmills.
TRANSFORMING THE SEA Another remarkable Dutch alteration of
their environment was the transformation of the
Zuider Zee
(ZEYE•duhr ZAY
). It was an arm of the North Sea and is now a fresh-
water lake. The idea was originally proposed in 1667. But it was not
until the late 1800s and early 1900s that the Dutch perfected a plan to
build dikes all the way across the entrance to the Zuider Zee. Since no
saltwater flowed into that body of water, it eventually became a fresh-
water lake. It is now called
Ijsselmeer (EYE•suhl•MAIR). The land around
the lake was drained, creating several polders that added hundreds of
square miles of land to the Netherlands.
Waterways for Commerce: Venice’s Canals
Like the Netherlands, Venice, Italy, is a place where humans created a
unique environment. About 120 islands and part of the mainland make
up the city of Venice. Two of the largest islands are San Marco and
Rialto. A broad waterway called the Grand Canal flows between them.
Moving people or goods in Venice depends upon using the more than
150 canals that snake around and through the islands. Consequently, to
get from one place to another in Venice, you generally have two choices:
take a boat or walk. Almost anything that is moved on wheels elsewhere
is moved by water in Venice.
AN ISLAND CITY GROWS Venice began when people escaping
invaders took shelter on inhospitable islands in a lagoon. They
remained there and established a settlement that eventually became
Venice. The city is located at the north end of the Adriatic Sea, a good
site for a port. As a result, trade helped Venice grow.
BUILDING ON THE ISLANDS Building Venice required construction
techniques that took into account the swampy land on the islands.
Builders sunk wooden pilings into the ground to help support the struc-
tures above. So many pilings were required that oak forests in the
northern Italian countryside and in Slovenia were leveled to supply the
wood. The weight of the buildings is so great that it has compressed the
underlying ground. This is one of the reasons that Venice is gradually
sinking. Other reasons include rising sea levels and the removal of too
much groundwater by pumping.
PROBLEMS TODAY Severe water pollution threatens historic Venice.
Industrial waste, sewage, and saltwater are combining to eat away the
Background
A land link to
Venice was built
in 1846. A railway
bridge connected
Venice to the
mainland.
EUROPE
Making
Comparisons
What are
possible dis-
advantages of
windmills and of
electric pumps?
Page 2 of 4 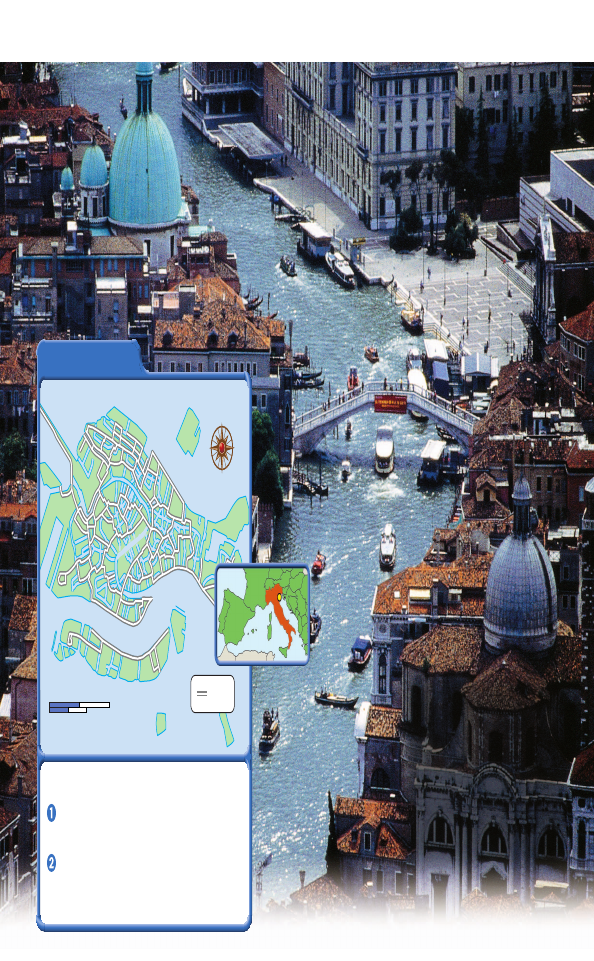 284 CHAPTER 12
foundations of buildings and damage the buildings themselves. Erosion
has allowed increased amounts of seawater into the lagoon. Because of
this, floods also endanger the city. In November 1966, six feet of flood-
water engulfed the city and ruined many of its buildings and the art-
work that they housed. Agricultural runoff flowing into Venice’s harbor
creates conditions that promote algae growth, sometimes called “killer
algae.” These algae grow rapidly and, after they die, decay. The decaying
process uses up oxygen in the water, so that fish also die. Dead fish
attract insects and create a stench, especially in warm weather.
A Centuries-Old Problem: Deforestation
Throughout history, humans have damaged and destroyed Europe’s
forests. The term deforestation means the clearing of forests from an
area. Often when we think of deforestation, we think of losing the great
rain forests of the world, such as those in South America, which you
learned about in Unit 3. But people have also been clearing the forests
of Europe since ancient times. Forests provided wood to burn for fuel
and to use as building material for ships and houses. When Europeans
began to develop industry in the 1700s and 1800s, they needed even
MOVEMENT Waterbuses,
motorboat taxis, small river boats,
and gondolas move people and
goods on the canals of Venice.
Gondolas generally are too
expensive for local people to hire.
Instead, tourists use them for
sightseeing.
G
r
a
n
d
C
a
n
a
l
G
i
u
d
e
c
c
a
C
a
n
a
l
S
t
.
M
a
r
k
'
s
C
a
n
a
l
Lagoon of Venice
San
Michele
Venice
La Giudecca
San Giorgio
Maggiore
Sacca Fisola
La Grazia
0
0.4.8 kilometers
.4 .8 miles
Transverse Mercator Projection
N
S
E
W
Street
Canals of Venice
SKILLBUILDER: Interpreting Maps
MOVEMENT What is the advantage of having
both streets and canals in Venice?
HUMAN-ENVIRONMENT INTERACTION How
have humans altered the environment of the islands
of Venice?
Page 3 of 4

Human–Environment Interaction 285
HUMAN–
ENVIRONMENT
INTERACTION A
forest in Bohemia in
the Czech Republic is
dying from the effects
of acid rain.
Why would restoring
the forest be a slow
process?
more wood to make charcoal for blast furnaces. Eventually, they used
coal as a fuel in place of wood, but not before huge areas of Europe had
lost their native forests.
ACID RAIN STRIPS FORESTS In the 1960s, people noticed that many
trees of the Black Forest in Germany were discolored, losing needles
and leaves, and dying. In time, scientists identified one cause of the tree
deaths as acid rain. Europe’s factories produce high amounts of sulfur
dioxide and nitrogen oxide emissions. These combine with water vapor
and oxygen to form acid rain or snow. Winds carry the emissions to
other parts of Europe, affecting an estimated one-fourth of all European
forests. This problem has hit Scandinavia particularly hard, since the
prevailing winds blow in that direction. As mentioned earlier, the Black
Forest in Germany also has suffered extreme damage. To save the
remaining forests, nations must work together to reduce air pollution.
You can read more about this in Chapter 14.
As you will read in Chapter 13, the ways people live upon the land
and interact with each other make up the human geography of Europe.
Connect to
the Issues
unification
How might a
union of nations
affect the clean-up
effort?
Places & Terms
Identify and explain
where in the region
these would be found.
• dike
• polder
• seaworks
• terpen
• Zuider Zee
• Ijsselmeer
Taking Notes
HUMAN-ENVIRONMENT
INTERACTION
Review your notes
for this section.
• What are examples of human
adaptation to the environment?
• What are examples of an
environment changed by humans?
Human-Environment
Interaction
Main Ideas
a. How have the people of
the Netherlands been able
to create more land for
their country?
b. How has pollution affected
the city of Venice?
c. How has industrialization
hurt the forests of
Europe?
Geographic Thinking
Making Comparisons
What is similar about the
ways that the people of the
Netherlands and the people
of Venice interact with their
environments? Think about:
• seaworks in the Netherlands
• canals in Venice
See Skillbuilder
Handbook, page R3.
SEEING PATTERNS Pollution has affected both Venice and the forests of Scandinavia. Create
two cause-and-effect charts outlining the causes and effects of pollution in each place.
Then write a sentence or two summarizing the similarities.
EUROPE
Page 4 of 4