Human-Environment Interaction 353
A HUMAN PERSPECTIVE Since the 1960s, irrigation policies in Central
Asia have had a dramatic impact on the Aral Sea. A recent visitor to an
old Aral fishing village described the change: “I stood on what had once
been a seaside bluff . . . but I could see no water. The sea was twenty-five
miles away.” The dried-up seabed had become a graveyard for aban-
doned ships. The powerful winds were covering local populations with
polluted dust picked up from the seabed. Thousands of people have left
the region, and those who remain risk illness, or even death. In this sec-
tion, you will read more about the complex relationship between the
environment and the people of Russia and the Republics.
The Shrinking Aral Sea
Between 1960 and the present, the Aral Sea lost about 80 percent of its
water. Central Asian leaders now face one of the earth’s greatest environ-
mental tragedies.
A DISAPPEARING LAKE The Aral Sea receives most of its water from
two rivers, the Amu Darya and the Syr Darya. Before the 1960s, these
rivers delivered nearly 13 cubic miles of water to the Aral Sea every
year. But in the 1950s, officials
began to take large amounts of
water from the rivers to irrigate
Central Asia’s cotton fields. Large-
scale irrigation projects, such as
the 850-mile-long Kara Kum
canal, took so much water from
the rivers that the flow of water
into the Aral slowed to a trickle.
The sea began to evaporate.
EFFECTS OF AGRICULTURE
Agricultural practices in Central
Asia caused other problems for
the Aral Sea. Cotton growers used
pesticides and fertilizers. These
chemicals were being picked up
by
runoff—rainfall not absorbed
by the soil that runs into streams and rivers. The runoff carried the
chemicals into the rivers that feed the Aral, with devastating effects. Of
the 24 native species of fish once found in the sea, none are left today.
Human-Environment
Interaction
Main Ideas
• The region’s harsh climate
has been both an obstacle
and an advantage to its
inhabitants.
• Attempts to overcome the
region’s geographic limits
have sometimes had negative
consequences.
Places & Terms
runoff
Trans-Siberian Railroad
Connect to the Issues
economic change
New
regional leaders must solve
economic problems caused by
the former Soviet Union.
RUSSIA & REP.
HUMAN-ENVIRONMENT
INTERACTION These two
images, taken in 1976 and 1997,
show what happened after
agricultural officials began
diverting water from the rivers
that feed the Aral Sea.
Page 1 of 4 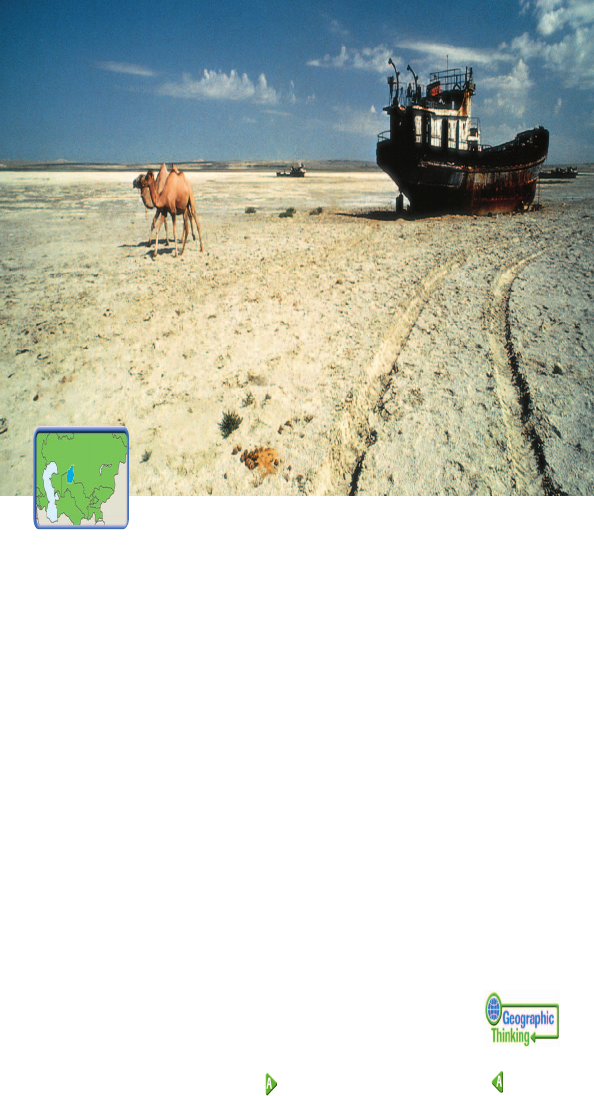 354 CHAPTER 15
Soon the damage spread beyond the lake. The retreating waters of the
Aral exposed fertilizers and pesticides, as well as salt. Windstorms began
to pick up these substances and dump them on nearby populations.
This pollution has caused a sharp increase in diseases. The incidence
of throat cancer and respiratory diseases has risen dramatically.
Dysentery, typhoid, and hepatitis have also become more common.
Child mortality rates in Central Asia are among the highest in the world.
SAVING THE ARAL Scientists estimate that even to keep the lake at its
present levels, you would have to remove 9 of the 18 million acres that
are now used for farming. This would create terrible hardship for the
farmers who depend on those fields for their livelihood. But many
argue that only such drastic measures can save the Aral.
The Russian Winter
The frigid landscapes of Siberia lie far from Central Asia. But the
rugged inhabitants of Siberia are also familiar with hardship.
COPING IN SIBERIA More than 32 million people make their homes
in Siberia. The climate presents unique challenges to its inhabitants,
especially during winter.
Scientists have recorded the most variable temperatures on earth in
Siberia. In the city of Verkhoyansk, temperatures have ranged from
–90°F in the winter to 94°F in the summer—a span of 184 degrees. But
most of the time it is cold. Temperatures drop so low that basic human
activities become painful. A worker in the Siberian mining center at
Norilsk explained how he and fellow workers turned up their collars
and turned down the ear flaps of their fur caps so that only their eyes
were visible. “Even then,” he reported, “your eyes would be so cold that
you’d close one until the one you were looking with froze, and then
swap over.”
The change of seasons brings little relief. Warmer weather melts ice
and snow and leaves pools of water that become breeding grounds for
mosquitoes and black flies. The problem becomes severe in the spring.
Using the Atlas
Examine the
maps on pages
340–341. What
relationship do
you see between
population density
and climate?
Background
Scientists have
reportedly found
salt from the Aral
Sea as far away
as the coast of
the Arctic Ocean.
PLACE Camels walk
by the rusting hulks of
abandoned ships on
what was once the
floor of the Aral Sea.
Why might the
ships have been
abandoned?
Page 2 of 4 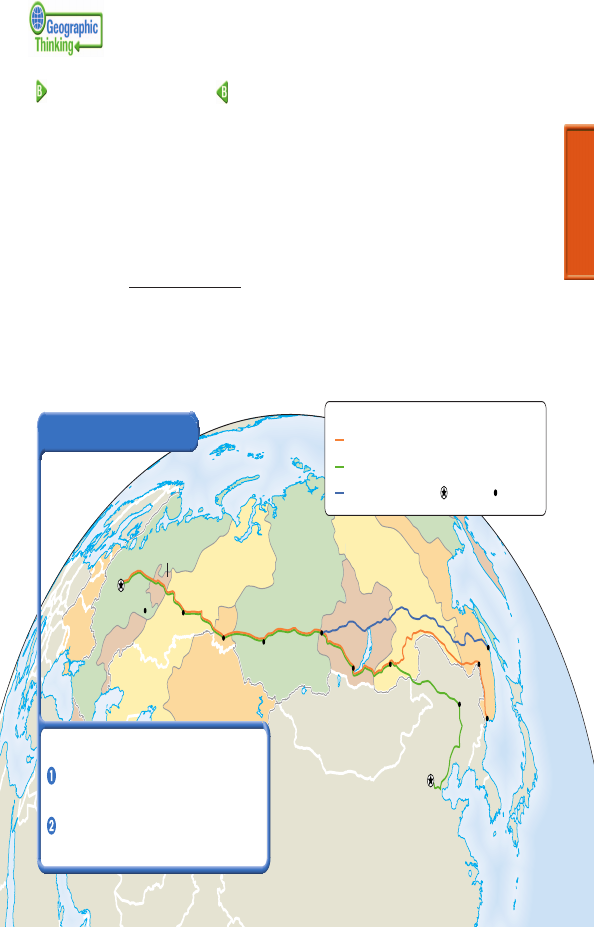 4
5
0
3
9
0
5
7
5
3
5
0
4
5
0
1
,
1
0
0
1
,
9
7
5
7
2
5
7
7
5
9
0
0
4
0
0
+1 hr.
+1 hr.
-1 hr.
+2 hrs.
+3 hrs.
+4 hrs.
+5 hrs.
+6 hrs.
+7 hrs.
Chita
Irku ts k
Harbin
Bei jing
Vladivostok
Khabarovsk
Sovetskaya
Ga van
Mosco w
Kazan
Yekaterinburg
O msk
No vosibirsk
Tayshet
CHINA
KAZAKHSTAN
MONGOLIA
RUSSIA
Lake
Baikal
Sea
of
Okhotsk
Sea
of
Japan
Yellow Sea
U
R
A
L
M
O
U
N
T
A
I
N
S
Trans-Siberian Railroad
Trans-Manchurian Railroad
Baikal-Amur Mainline
+1 hr.
200
Rail Routes
Time difference from Moscow
Miles between cities
Capital City
Swamps form when northward flowing rivers, swollen by spring rains,
run into still-frozen water further north. Soon, enormous black clouds
of insects are attacking Siberia’s residents.
The climate also affects construction in Siberia. Permafrost makes
the ground in Siberia iron-hard. However, a heated building will thaw
the permafrost. As the ground thaws, buildings sink, tilt, and eventual-
ly topple over. To prevent such problems, builders raise their structures
a few feet off the ground on concrete pillars.
WAR AND “GENERAL WINTER” Russia’s harsh climate has caused dif-
ficulties for its inhabitants, but it has also, at times, come to their aid.
In the early 1800s, the armies of the French leader Napoleon
Bonaparte were taking control of Europe. In the spring of 1812,
Napoleon decided to extend his control over Russia. He gathered his
army together in Poland and from there began the march on Moscow.
But as his troops advanced, so did the seasons. When Napoleon
arrived in Moscow in September, the Russian winter was not far
behind. Moreover, the citizens of Moscow had set fire to their city
before fleeing, so there was no shelter for Napoleon’s troops.
Napoleon had no choice but to retreat during the bitter Russian win-
ter. He left Moscow with 100,000 troops. But by the time his army
arrived back in Poland, the cruel Russian winter had helped to kill more
than 90,000 of his soldiers. Some historians believe that Russia’s
“General Winter” succeeded in defeating Napoleon where the armies of
Europe had failed.
Crossing the “Wild East”
At the end of the 19th century, Siberia was similar to the “Wild West”
of the United States. Travel through the region was dangerous and
slow. For these reasons, Russia’s emperor ordered work to start on a
Trans-Siberian Railroad that would eventually link Moscow to the
Pacific port of Vladivostok.
RUSSIA & REP.
Seeing Patterns
Besides
climate, what
other geographic
factors might an
army invading
Russia have to
consider?
Rail Routes Across Russia
SKILLBUILDER: Interpreting Maps
LOCATION As a train moves eastward after passing over
the Ural Mountains, what is the first major stop?
MOVEMENT What railroad route would you take if you
wanted to pass north of Lake Baikal?
355
Page 3 of 4

356 CHAPTER 15
AN ENORMOUS PROJECT The project was a massive undertaking.
The distance to be covered was more than 5,700 miles, and the tracks
had to cross seven time zones. Between 1891 and 1903, approximately
70,000 workers moved 77 million cubic feet of earth, cleared more than
100,000 acres of forest, and built bridges over several major rivers.
RESOURCE WEALTH IN SIBERIA Russian officials did not undertake
this massive project simply to speed up travel. They also wanted to pop-
ulate Siberia in order to profit from its many resources.
Ten years after the completion of the line in 1904, nearly five million
settlers, mainly peasant farmers, had taken the railway from European
Russia to settle in Siberia.
As migrants streamed into Siberia, resources, such as coal and iron
ore, poured out. Siberia, one author wrote, began to yield riches that “she
has under guard of eternal snow and ice, so long held in trust for future
centuries.” In the years that followed, the railroad would aid the political
and economic development of Russia and the Republics, which you will
read about in the next chapter.
Places & Terms
Explain the importance
of the following terms.
• runoff
• Trans-Siberian
Railroad
Taking Notes
REGION Review the notes you
took for this section.
• What precautions must builders
take in Siberia? Why?
• How did the construction of the
Trans-Siberian Railroad affect
the region’s landscape?
Human-Environment
Interaction
Main Ideas
a. Why is the Aral Sea
shrinking?
b. How has the region’s
harsh climate helped its
inhabitants?
c. What were the main
reasons for the
construction of the
Trans-Siberian Railroad?
Geographic Thinking
Making Decisions If you
were a regional leader, what
steps would you take to end
the Aral Sea disaster? Think
about:
• how your solutions will
affect people in the region
MAKING COMPARISONS Do more research on the Trans-Siberian Railroad. Then do research
on the construction of the transcontinental railroad in the United States. Use a Venn diagram
to compare and contrast the two projects.
MOVEMENT A train
from Ukraine travels
on Trans-Siberian
tracks on its journey
toward Vladivostok.
What impact do
railroads have on
commerce?
RESEARCH LINKS
CL A S SZONE . COM
Page 4 of 4