Use Fill to complete blank online BUREAU OF ALCOHOL, TOBACCO, FIREARMS, AND EXPLOSIVES (DC) pdf forms for free. Once completed you can sign your fillable form or send for signing. All forms are printable and downloadable.

On average this form takes 29 minutes to complete

U.S.A. forms for Bureau of Alcohol, Tobacco, Firearms, and Explosives

ATF E-Form 4473 (5300.9)
Revised October 2016
U.S. Department of Justice
Bureau of Alcohol, Tobacco, Firearms and Explosives
Firearms Transaction Record
OMB No. 1140-0020
WARNING: You may not receive a firearm if prohibited by Federal or State law. The information you provide will be used to
determine whether you are prohibited from receiving a firearm. Certain violations of the Gun Control Act, 18 U.S.C. 921 et.
seq., are punishable by up to 10 years imprisonment and/or up to a $250,000 fine.
Transferor's/Seller's
Transaction Serial
Number (If any)
Read the Notices, Instructions, and Definitions on this form. Prepare in original only at the licensed premises ("licensed premises"
includes business temporarily conducted from a qualifying gun show or event in the same State in which the licensed premises is
located) unless the transaction qualifies under 18 U.S.C. 922(c). All entries must be handwritten in ink. "PLEASE PRINT."
Section A - Must Be Completed Personally By Transferee/Buyer
1. Transferee's/Buyer's Full Name (If legal name contains an initial only, record "IO" after the initial. If no middle initial or name, record "NMN".)
Last Name (Including suffix (e.g., Jr, Sr, II, III)) First Name Middle Name
2. Current State of Residence and Address (U.S. Postal abbreviations are acceptable. Cannot be a post office box.)
Number and Street Address
City
County State ZIP Code
3. Place of Birth
U.S. City and State -OR- Foreign Country
4. Height
Ft.
In.
5. Weight
(Lbs.)
6. Sex
Male
Female
7. Birth Date
Month Day Year
8. Social Security Number (Optional,
but will help prevent misidentification)
9. Unique Personal Identification Number (UPIN) if applicable (See
Instructions for Question 9.)
10.a. Ethnicity
Hispanic or Latino
Not Hispanic or Latino
10.b. Race (In addition to ethnicity, select one or more race in 10.b. Both 10.a. and 10.b. must be answered.)
American Indian or Alaska Native
Asian
Black or African American
Native Hawaiian or Other Pacific Islander
White
11. Answer the following questions by checking or marking "yes" or "no" in the boxes to the right of the questions. Yes No
a. Are you the actual transferee/buyer of the firearm(s) listed on this form? Warning: You are not the actual transferee/buyer if you are
acquiring the firearm(s) on behalf of another person. If you are not the actual transferee/buyer, the licensee cannot transfer the
firearm(s) to you. Exception: If you are picking up a repaired firearm(s) for another person, you are not required to answer 11.a. and may
proceed to question 11.b. (See Instructions for Question 11.a.)
b. Are you under indictment or information in any court for a felony, or any other crime for which the judge could imprison you for more than one
year? (See Instructions for Question 11.b.)
c. Have you ever been convicted in any court of a felony, or any other crime for which the judge could have imprisoned you for more than one year,
even if you received a shorter sentence including probation? (See Instructions for Question 11.c.)
d. Are you a fugitive from justice? (See Instructions for Question 11.d.)
e. Are you an unlawful user of, or addicted to, marijuana or any depressant, stimulant, narcotic drug, or any other controlled substance?
Warning: The use or possession of marijuana remains unlawful under Federal law regardless of whether it has been legalized or
decriminalized for medicinal or recreational purposes in the state where you reside.
f. Have you ever been adjudicated as a mental defective OR have you ever been committed to a mental institution? (See Instructions for Question
11.f.)
g. Have you been discharged from the Armed Forces under dishonorable conditions?
i. Have you ever been convicted in any court of a misdemeanor crime of domestic violence? (See Instructions for Question 11.i.)
12.a. Country of Citizenship: (Check/List more than one, if applicable. Nationals of the United States may check U.S.A.)
United States of America (U.S.A.) Other Country/Countries (Specify)
Yes
No
12.b. Have you ever renounced your United States citizenship?
h. Are you subject to a court order restraining you from harassing, stalking, or threatening your child or an intimate partner or child of such partner?
(See Instructions for Question 11.h.)
12.c. Are you an alien illegally or unlawfully in the United States?
12.d.1. Are you an alien who has been admitted to the United States under a nonimmigrant visa? (See Instructions for Question 12.d.)
12.d.2. If "yes", do you fall within any of the exceptions stated in the instructions? N/A
13. If you are an alien, record your U.S.-Issued Alien or Admission number (AR#, USCIS#, or I94#):
Previous Editions Are Obsolete Transferee/Buyer Continue to Next Page
STAPLE IF PAGES BECOME SEPARATED
Page 1 of 6 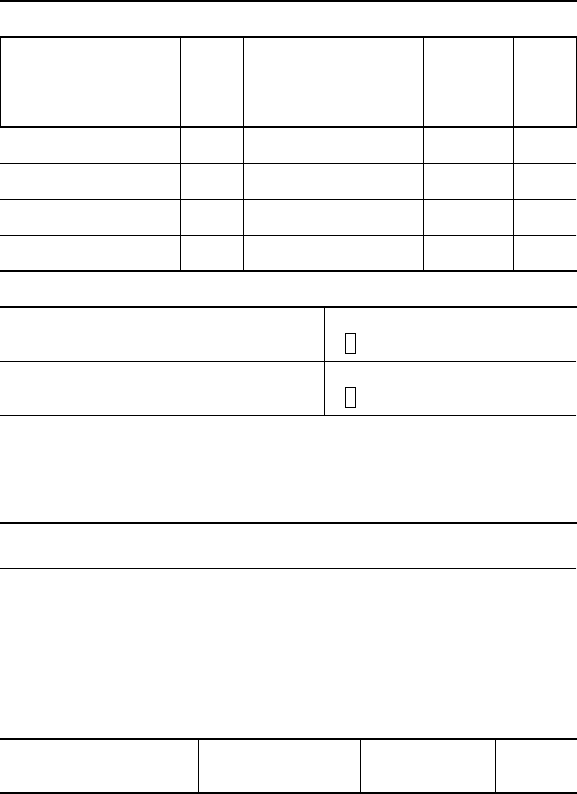