On average this form takes 37 minutes to complete

I
I
I I
I
I I I I I I I I I I I I
State Employees’ Credit Union Application for Employment
We appreciate your interest in our organization. Please complete the application as fully as possible. Applicants are considered for available positions without regard to race, color,
religion, age, sex, sexual orientation, gender identity, national origin, genetic information, veteran status, disability or other classification protected by law. To be considered as an
applicant, you must designate the particular available position for which you are seeking employment.
Position applied for: Date of application:
Applicant source:
•
1 = Walk in
• 3 = Friend • 5 = Advertisement • 7 = School/College • 9 = Other–Explain
(select one)
•
2 = Job Service
•
4 = Relative
•
6 = Employment Agency
•
8 = Job Posting
Personal Data
Last Name: First Name: Middle Initial:
Address: City: State: Zip:
Telephone Number: )
If employed and under 18, can you furnish a work permit?
Have you filed an application here before?
Have you ever been employed here before?
If yes, give date:
Have you ever been bonded?
Have you ever refused bond?
Are you legally eligible to work in the United States?
(SECU will require proof of citizenship or immigration status upon employment. SECU does not participate in the H1B or TN Visa programs.)
Do you have any relatives employed with the State Employees’ Credit Union? If yes, please list them and their relationship to you:
Your Job Requirements
Salary desired: When could you be available to begin work?
Are you willing to relocate anywhere in the state?
Can you travel if a job requires it?
Select desired type of employment:
The following conditions may be required at some point in a job assignment. If required, would you be willing to work:
a. shift work? c. a work schedule other than Monday through Friday?
b. overtime work? d. a rotational work schedule? e. fluctuating hours?
Education
High School Business/Technical School College Graduate School
School name
and location
Years completed
Diploma/Degree Earned

PRE-OFFERVOLUNTARYSELF-IDENTIFICATION
EEO / AFFIRMATIVE ACTION INFORMATION
SECU provides equal employment opportunity to all qualified persons regardless of race, color,
religion, age, genetics, sex, sexual orientation, gender identity, national origin, disability, veteran
status or other classification protected by law. This policy is applied to all employment actions
including but not limited to recruitment, hiring, upgrading, promotion, transfer, demotion, layoff,
recall, termination, rates of pay or other forms of compensation and selection for training including
apprenticeship.
State Employees’ Credit Union is required by law to document demographic information of applicants
for affirmative action reporting. Completion of this form is voluntary, and participation or refusal of
participation will not affect the hiring decision.
Please complete the following and submit with your application.
Last Name: First Name:
Date:
Position Applied For:
GENDER
Male
Female
Decline to Self-Identify
RACE/ETHNICITY
Hispanic or Latino
If not Hispanic or Latino:
White
Black or African American
Native Hawaiian or Pacific
Islander
Asian
American Indian or Alaska
Native
Two or More Races
Decline to Self-Identify
VETERAN STATUS
I identify as one or more of
the classifications of
protected veteran listed
below
I am not a protected
veteran
Decline to Self-Identify
Signature:
Signature must be handwritten.
*See next page for EEOC Race/Ethnic identification category definitions and protected veteran classifications*
August 26, 2019
click to sign
signature
click to edit

__________________________
__________________
Voluntary Self-Identification of Disability
Form CC-305
OMB Control Number 1250-0005
Expires 1/31/2020
Page 1 of 2
Why are you being asked to complete this form?
Because we do business with the government, we must reach out to, hire, and provide equal opportunity to
qualified people with disabilities.
i
To help us measure how well we are doing, we are asking you to tell us if
you have a disability or if you ever had a disability. Completing this form is voluntary, but we hope that you will
choose to fill it out. If you are applying for a job, any answer you give will be kept private and will not be used
against you in any way.
If you already work for us, your answer will not be used against you in any way. Because a person may
become disabled at any time, we are required to ask all of our employees to update their information every five
years. You may voluntarily self-identify as having a disability on this form without fear of any punishment
because you did not identify as having a disability earlier.
How do I know if I have a disability?
You are considered to have a disability if you have a physical or mental impairment or medical condition that
substantially limits a major life activity, or if you have a history or record of such an impairment or medical
condition.
Disabilities include, but are not limited to:
• Blindness • Autism • Bipolar disorder • Post-traumatic stress disorder (PTSD)
• Deafness • Cerebral palsy • Major depression • Obsessive compulsive disorder
• Cancer • HIV/AIDS • Multiple sclerosis (MS) • Impairments requiring the use of a wheelchair
• Diabetes • Schizophrenia • Missing limbs or • Intellectual disability (previously called mental
• Epilepsy
•
Muscular
partially missing limbs retardation)
dystrophy
Please select one of the boxes below:
YES, I HAVE A DISABILITY (or previously had a disability)
NO, I DON’T HAVE A DISABILITY
I DON’T WISH TO ANSWER
Signature
Today’s Date
Signature must be handwritten.
click to sign
signature
click to edit

Voluntary Self-Identification of Disability
Form CC-305
OMB Control Number 1250-0005
Expires 1/31/2020
Page 2 of 2
Reasonable Accommodation Notice
Federal law requires employers to provide reasonable accommodation to qualified individuals with disabilities.
Please tell us if you require a reasonable accommodation to apply for a job or to perform your job. Examples
of reasonable accommodation include making a change to the application process or work procedures,
providing documents in an alternate format, using a sign language interpreter, or using specialized equipment.
i
Section 503 of the Rehabilitation Act of 1973, as amended. For more information about this form or the equal
employment obligations of Federal contractors, visit the U.S. Department of Labor’s Office of Federal Contract
Compliance Programs (OFCCP) website at
www.dol.gov/ofccp.
PUBLIC BURDEN STATEMENT: According to the Paperwork Reduction Act of 1995 no persons are required
to respond to a collection of information unless such collection displays a valid OMB control number. This
survey should take about 5 minutes to complete.

~l
oyees' Credit
Union
App
H
cati'on
for
Empl
0Jme
nl
Addendum
- -
CONSUMER REPORT FOR EMPLOYMENT PURPOSES
I hereby authorize State Employees’ Credit Union to obtain a consumer report and a criminal
records search from a consumer reporting agency for employment purposes only. If I am hired
by the State Employees’ Credit Union, this authorization will be valid during my employment.
I also authorize FirstPoint to perform a criminal records search. I understand that FirstPoint
does not guarantee the accuracy or timeliness of the information obtained from other sources
and that FirstPoint will not be liable for any inaccuracy in the information obtained from other
sources that are included in the INSIGHT report.
Signature of Applicant: Date:
FOR INTERNAL USE ONLY
Account Number:
Name (Please Print):
Current Address:
Social Security Number:
Birth Date:
SECU 709 (Revised 07/07/16)
click to sign
signature
click to edit 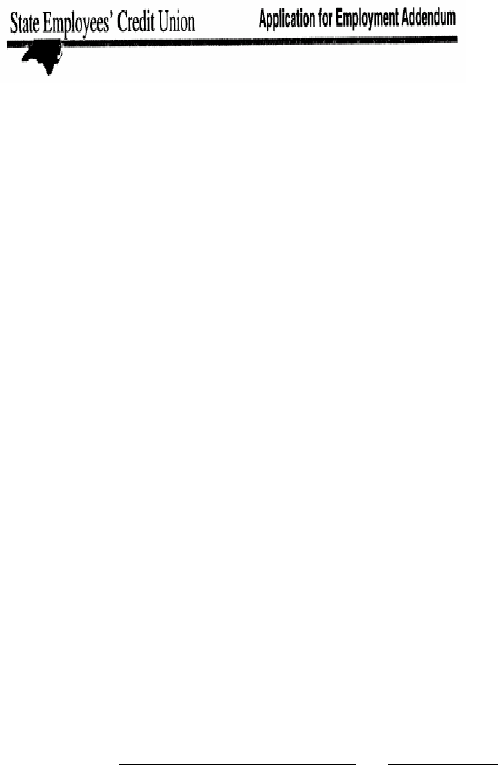 State
Em~
,
foyees'
Credit Union
2
11-Ji
.
AgpHcaUon
for
Employmenl
Addendum
Nationwide Mortgage Licensing System Disclosure
I agree to disclose if I have ever been registered with the Nationwide Mortgage Licensing
System (NMLS) and will provide my NMLS ID. I agree to disclose any administrative,
criminal or civil findings made by any government jurisdiction once I have been offered
employment. If I am hired by the State Employees’ Credit Union, this authorization will be
valid during my employment.
Signature of Applicant: Date:
07/07/16
click to sign
signature
click to edit