Use Fill to complete blank online EASTERN ARIZONA COLLEGE pdf forms for free. Once completed you can sign your fillable form or send for signing. All forms are printable and downloadable.

On average this form takes 25 minutes to complete

The APPLICATION FOR EMPLOYMENT (Eastern Arizona College) form is 5 pages long and contains:

APPLICATION FOR EMPLOYMENT
Name
Last First Middle
Address
P.O. Box/Street City State Zip
Telephone Number ( ) - Social Security Number (last four digits only)
Position applied for
How did you learn of this position opening?
Please complete the entire application – even if supporting documentation is attached/included.
Are you eligible to work in the United States? (Proof of eligibility will be required if hired.)
Have you ever been convicted of a crime other than a minor traffic offense?
If yes, please give details. A conviction will not necessarily disqualify an applicant from the position sought.
Have you been employed by Eastern Arizona College before?
If yes, when?
Do any of your family members currently work for Eastern Arizona College?
If yes, who?
(Family members: Spouse; Child; Grandchild; Parent; Grandparent; Brother or sister, whole or half blood, and their
spouses; Spouse’s parents, siblings and children)
Do you have any experience, knowledge, skills, abilities, or qualifications that you feel would especially fit you for
work with Eastern Arizona College in the position applied for?
Revised 5/2020 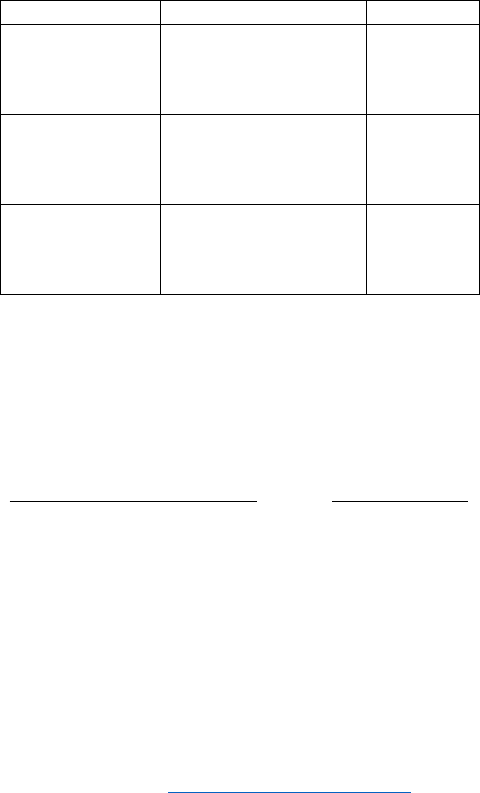 Revised 5/2020
4
Professional/Employment References – Other than those listed above
Name and Occupation
Address
Telephone Number
I certify that the information provided in this application is true and complete to the best of my knowledge. I
authorize investigation into all information contained in and statements I have made on this application as may be
necessary for reaching an employment decision. I also understand that should an employment offer be extended
to me and accepted that I will fully adhere to the policies and regulations of Eastern Arizona College. I further
understand that any employment offered is ‘at will’ as contracted and nothing said or done during the application
or interview process shall be deemed to constitute an implied employment contract.
Applicant Signature Date
AN E Q U A L O P P O R T U N I T Y / A F F I R M A T I V E A C T I O N E M P L O Y E R
Eastern Arizona College is in compliance with Titles VI and VII of the Civil Rights Act of 1964, Title IX of the Education Amendments of
1972, and the Rehabilitation Act of 1973, and does not discriminate on the basis of race, creed, color, national origin, disability, age, or sex
in any of its policies, practices, or procedures. This includes, but is not limited to, admissions, employment, financial aid, educational
services, programs and activities
Eastern Arizona College complies with the Jeanne Clery Disclosure of Campus Security Policy and Campus Crime Statistics Act, 20 U.S.
Code § 1092(f) and the Higher Education Opportunity Act of 2008, by distributing an Annual Security and Fire Safety Report. The report is
intended to inform the campus community of campus safety information, Clery Act crime statistics, on-campus housing fire data and
statistics, and policies and procedures relating to sexual violence, emergency response, and other safety factors. A copy of EAC’s Annual
Security and Fire Safety Report can be found at http://www.eac.edu/About_EAC/Consumer_Information/report.pdf. Additional copies are
available at the Alumni Library (Thatcher Campus), the Learning Resource Center (Payson Campus), and the library (Gila Pueblo Campus).
A paper copy of the report will be provided upon request at EAC’s District Office, located at 615 N. Stadium Avenue, Thatcher, AZ.
A daily crime log listing all criminal and alleged criminal incidents reported to campus police/security is available on-site, during normal
business hours, at each of the campuses: EAC Police Department, located at 620 N. College Avenue, Thatcher, AZ (Thatcher Campus); Gila
Pueblo Campus Administration Office, located at 8274 Six Shooter Canyon Road, Globe, AZ (Gila Pueblo Campus); and Payson Campus
Administration Office, located at 201 N. Mud Springs Rd., Payson, AZ (Payson Campus).
A fire log containing all reported fires that occurred at any of EAC's on-campus student housing facilities is available during normal business
hours at the Housing Office, located at 900 N. College Avenue, Thatcher, AZ.